> FAQ Home
> Genre: Fiction > ‘The ocean was exactly as she’d imagined it’ 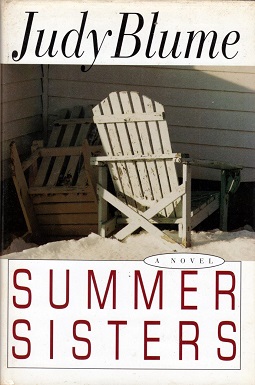 CBR14 BINGO square: Shadow. (Holiday would be too easy.) Judy Blume’s Summer Sisters (1998) is a mood, a vibe, an energy, rather than a novel. It’s the salty taste of chips (or fries) and the soft sweetness of ice cream and the sharp chill of a vodka and cranberry with ice. It’s a long slow afternoon by the shore, a long slow stare into the shadows of the past. It’s strawberry lipgloss and windblown hair and new yellow swimsuits and singing along to ABBA and holding hands in the sunshine and crying in the dark. It’s about desire, and friendship, and class, and money. I’ve read it a bunch of times in the last twenty years, and I read it again this summer–I bought a copy with the cover on the left in a secondhand shop in like 2001, and it’s because of this cover (level 1), and the thematic idea of the shadow (in the main characters’ relationships, and the shadow of the past) in the text (level 2) , that I’m invoking the CBR 14 BINGO square ‘shadow’ here.

Summer Sisters is focalised via shy, thoughtful Victoria (Vix), a blue-c0llar brunette girl in a house crowded with siblings and parental resentment, who gets befriended, then practically adopted, by Caitlin Somers, the brazen golden-haired new girl in her class in Santa Fe, New Mexico. After a holiday spent together with Caitlin’s father Lamb and her brother Sharkey on Martha’s Vineyard, Caitlin and Vix become ‘summer sisters’, figuring out periods (of course, this is Judy Blume), and experimenting with sex and flirting with boys–not quite in that order (which made the book a subject of some controversy, though this is a book aimed at adults rather than teens). What Vix and Caitlin can’t quite agree on is what to be when they grow up: Caitlin is determined to ‘never be ordinary’, styling herself in her senior yearbook as ‘tiger tiger burning bright’, while Vix’s motto is the more work ethic-oriented  ‘a life without goals is not worth living’.

When I first read the book at around 19 I was obsessed with the romance; when I reread it this summer what struck me was money. Despite their love for each other, Vix’s and Caitlin’s worlds and ways of thinking are very different. Vix is bemused by Caitlin’s family and the social dynamics of the island of Martha’s Vineyard:

You didn’t have to be a genius to see that Lamb had as hard a time making do as her parents. All you had to do was look around at the shabby furniture, the beat-up cars, the clothes they wore. They even ate poor. No meat, not even hamburgers. (48)

It’s only later that she realises that Lamb, the laid-back hippie, is Lambert Mayhew Somers the Third, a blue-blooded Bostonian with a vast trust fund–the shabby beach house is Marie Antoinette’s dairy, Jarvis Cocker’s girl from Greece at the supermarket. Part of Vix’s journey, then, is to figure out her complicated feelings about the privileges and advantages that association with the Somers’s affords her–a scholarship to a private school to be with Caitlin, another scholarship to Harvard–and the conflict her role as Caitlin’s ‘summer sister’ causes with her boyfriend, her first love, the young island construction worker Bru.

The chronology of the book begins in the 1990s, then heads back to that first summer, 1977, and draws Vix’s life and sketches Caitlin’s from then to the present. Vix’s narrative is interspersed with glimpses into the minds of the other characters–Vix’s parents, Bru, Sharkey, Caitlin’s drifty mother Phoebe, Vix’s college roommates, Lamb’s girlfriend and then wife Abby:

She’ll be damned if she’s going to let the kids spoil this. Never mind the hatred in Caitlin’s eyes. It was a mistake to walk into her life unannounced and unexpected. She should have known better. It might take some time but she’ll win her over. (49-50)

But Caitlin’s own voice is a notable absence–she doesn’t get her own chapter, her point of view and story are given only through Vix’s adoring perspective and the more ambivalent views of the other characters. Perhaps Caitlin’s and Vix’s bond is so intense that for us to see them both exposed would be like staring into the sun; perhaps the point of Caitlin–reckless, sexy, feisty–is that we can’t fully know her because her privilege gets in the way. Perhaps it’s just that people are puzzles–or perhaps we’re meant to wonder, who actually is the sun and who is the shadow?

There is boy drama, and friendship drama, and family drama, but most of all there is the slow unfolding of teenage dreams, from rides on a carousel to hitchhiking and beer on the beach with boys.

It was the kind of summer you don’t write home about. Vix didn’t exactly lie, but like Caitlin, she began to practice selective truth telling. What her family didn’t know wouldn’t hurt them. (24-25)