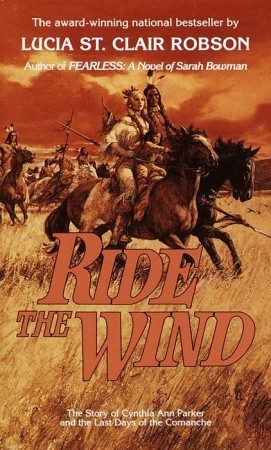 Captured in a raid, nine-year-old Cynthia Ann Parker is adopted by a Comanche couple and becomes integrated into the tribe, given the name Naduah, and eventually grows up to marry a Comanche chief.

I love long lush historical fiction, especially older ones that lean more heavily into sprawling plots than most modern books. Ride the Wind delivered on all these fronts, and told a fascinating true story to boot.

I enjoyed the style of writing, which was somewhat purple at times but created a vivid sense of time and place, making the prairie come alive. The author clearly did a lot of research to help depict the Comanche way of life during this time period. The love story between Naduah and Wanderer was sweet and romantic, if rooted in somewhat dubious beginnings. The various twists and turns of the plot pulled at my heartstrings and kept me engaged.

However, there was an awful lot of violence in this book, though I am glad the author for the most part did not gloss over atrocities committed on both sides. The story also dragged in places. Overall I found the second half of the book to be weaker than the first, as there are a lot of time skips and many characters exit the story with little fanfare.

Ultimately, I enjoyed this read quite a bit and learned a lot about the Comanche and settlers in this period before the advent of reservations.