> FAQ Home
> Genre: Fantasy > a quirky little book that was recommended by a few people 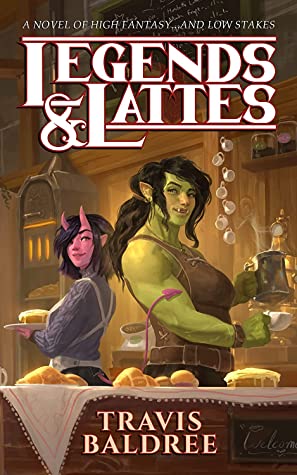 This is like, a cozy coffeeshop AU for a fantasy series that doesn’t exist. Everyone who told me about this book called it super low-stakes, and while I can’t say I entirely agree, this is definitely a book for when you’re a bit tired of *everything* and want to cuddle up.

And to be fair–life isn’t ever low stakes. A slice of life book is going to have the same stakes as life.

As people have blurbed, our main character Viv the orc barbarian (Baldree’s words, not mine!) has decided to literally hang up her sword and try her hand at a new type of venture. You see, once upon a quest she ran into a little shop where the proprietor was selling this type of hot…bean water. With milk foam. It was called…coffee. And Viv, see, she fell in love and wanted to replicate that atmosphere, using the savings accumulated from a lifetime of plundering.

Interjection here that as someone who finds the smell of coffee downright nasty, I just imagined each time she was waxing rhapsodic that she was talking about chocolate.

That in an of itself might have been enough to propel a short novella, but to give the story some skeleton Baldree introduces the concept of Scandriel’s Stone, a mythical good luck gallstone/charm from the brain of a nasty beasty which is said to draw luck towards it. Viv grabbed the stone as her bounty from the last large raid, and she’s counting on its spell to make her coffee shop a success.

Well, that and a prodigious helping of sincerity and serendipity. Honestly, there are no punches pulled in this book. When Viv trusts the quirky Cal the Carpenter with money to buy lumber and return the next morning, Cal…does so. When she places an order with Amazon.co.magic for an espresso machine, it…arrives. She has enough money to pay for all the repairs and finishings that she needs for a shop. When Thimble invents cinnamon rolls, they…sell.

And sure, there’s a plot around the stone, bribing (or not bribing) the local mafia, and a particularly irritating ex-colleague who’s also a bit of an ass. The real story, though, is Viv making a new life for herself that doesn’t involve any of the skills that she used to use to make money (i.e., slashy stabby ones). Doing so is literally and figuratively just a arm’s length away, but she chooses each time to do things differently. It’s not that she’s coming in and changing the community culture and taking down the local mafia–that’s a longer book and not the vibe of this story. It’s that she’s working within the structure to make something different and better.