> FAQ Home
> Genre: Fiction > “You can check-out any time you like/But you can never leave!” 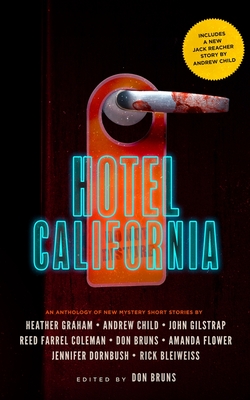 In this anthology of eight crime stories, the reader is introduced to a quite wide cast that includes multiple hitmen and detectives, a senator, an influencer – and a whole bunch of victims.

I don’t read many anthologies, but I do make an exception for ones consisting of crime stories. I think the mystery genre is one of the most diverse when it comes to the way authors explore its common tropes. Hotel California‘s central theme is that each story is inspired by a song by The Eagles, with some more closely aligning to the songs than others.

I’m not familiar with most of the authors in this anthology, so it was fun for me to be introduced to them through these short stories. The tone of the stories ranges from noir to semi-cozy to surreal, providing enough variety that at least a couple of stories will appeal to each reader’s particular sensibilities.

I most enjoyed Reed Farrel Coleman’s “Victim of Love” and Amanda Flower’s “Try and Love Again”. The former tells the tale of a down-trodden man whose role in life is altered by the influence of a Siamese cat mask, while the latter is about a private eye who is charged with investigating a twenty-year-old cold case on a small island in Michigan.