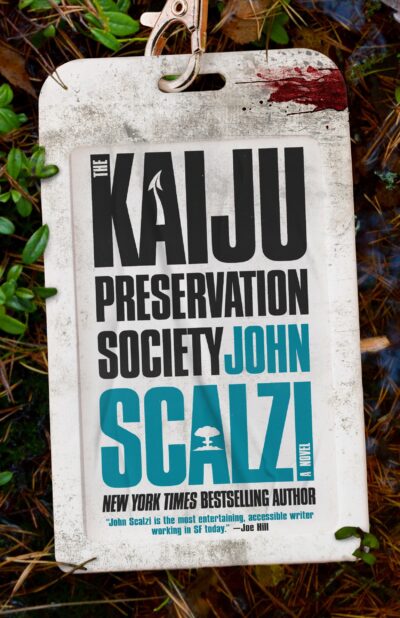 This is objectively a four star book, but I’m giving it five stars, because I can. This book was just super fun to read and it was exactly what I needed and wanted. I will be reading it again whenever I need to feel nerdy joy and my affection for humanity needs a boost.

The title of this book sort of says all you need to know before going into it, but if you need more, here’s just a little bit.

Jamie is working for a food delivery start-up in NYC when the pandemic starts, and after being fired in a really shitty way, ends up working as one of their food “deliverators” instead. On one delivery trip, Jamie runs into an old acquaintance named Tom who says that he has a great job that he loves and pays really well working to help endangered animals, and by the way if Jamie needs a job, there is an unexpected opening, and Tom would be happy to put in a good word. This is how Jamie ends up on another world entirely learning about and helping to preserve kaiju.

You can tell that Scalzi just had a mess of fun writing this book. It has his sense of humor plastered all over it, but some of the stuff is so ridiculous (and it’s ridiculous that he makes it work!) that you can just tell how much fun he had thinking all this crap up. For example SPOILERS the kaiju evolved to get their energy from biological nuclear reactors inside their bodies lol what END SPOILERS. This book is what happens if you gave a nerd a toy box and then told them to tell you a story using their favorite things inside the toy box, and because they’re a fully grown nerd, they make it plausible with real sounding science, even while it’s extremely fun and ridiculous.

I had so much fun.

“So we’re the monster police, too?” I said to Tom.
“Correct,” he replied. “The only real question is, who are the monsters?”
“They ask that question in every monster movie, you know. It’s an actual trope.”
“I know,” Tom said. “What does it say about us that it’s relevant every single time they ask it?”