> FAQ Home
> Genre: Fiction > “We knew it was coming, but we behaved inconsistently.” 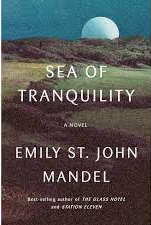 Reading Emily St. John Mandel is like falling asleep to the sound of rain: The words wash over you and a steady drumbeat of beauty lulls you into something like perfect contentment. Just reading the loveliness of her sentences would be enough, but then she continues to dazzle by leading your thoughts into new possibilities about the universe, as your mind is apt to drift to questions of cosmic import in the moments before sleep, while those steady drops beat against your windowpane.

It’s hard to categorize her latest novel, Sea of Tranquility. I suppose it’s science fiction, as the story takes the reader through time from early 20th century England, where a young man gets exiled by his family for suggesting that British imperialism was maybe not so great (“William the Conqueror was a thousand years ago. Surely we can strive to be somewhat more civilized than the maniacal grandson of a Viking raider”), to a colony on the moon 500 years in the future.  In between, an author travels to earth for a book tour and dies during a pandemic. Or does she? As timelines mesh and overlap, a common thread is a man playing the violin in an airship terminal.

But as with Station Eleven, art and humanity are at the foundation of the story, with time travel and artificial intelligence serving as the means by which questions about the universe come to light. Somehow, in a tight 255 pages, the author compels the reader to contemplate colonialism, predestination, and the nature of life itself while telling the story of future colonies on the moon, time travelers, and plague. Within the first half of the novel, the question of whether we are living in a simulation is presented: “If we can run fairly convincing simulations of reality now, think of what those simulations will be like in a century or two. The idea with the simulation hypothesis is, we can’t rule out the possibility that all of reality is a simulation.” And yet in the end, it hardly matters.

The novel also contains echos of Mandel’s other works. Characters from The Glass Hotel make appearances, and the aforementioned author, Olive Llewellyn, is promoting a novel she wrote about a pandemic, which seems to be a reference to Mandel herself, whose Station Eleven gained renewed popularity during the COVID-19 pandemic. That Mandel’s universes overlap isn’t surprising, given how extensive they are. Fictional author Llewellyn’s novel reflects what we’ve all probably felt these past two years: “We knew it was coming, but we behaved inconsistently. We stocked up on supplies–just in case–but sent our children to school, because how do you get any work done with the kids at home? (We were still thinking in terms of getting work done. The most shocking thing in retrospect was the degree to which all of us completely missed the point.)”

Sea of Tranquility is the type of novel you finish and then want to immediately start again in order to view from having seen the end (which, in itself, says something about time travel, I think). I have been hovering between 4 and 5 stars; I didn’t quite enjoy this as much as Mandel’s previous two novels, mainly because the time travel aspect and final reveal seemed a bit familiar to me. Yet here I am wanting to read it again. . .and maybe when I do I will fall definitively on the 5-star side. In the meantime, I will let the memory of Mandel’s words wash over me like the rain and will fall asleep contemplating the nature of the universe.