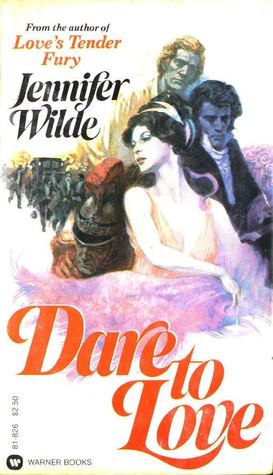 Mary Ellen is a girl from Cornwall, deserted by her lover. Elena Lopez is a dancer, glamorous and wild, the mistress of musicians and kings. Dare to Love tells the story of her journey from one to the other.

Jennifer Wilde is the pseudonym of T.E. Huff, who wrote under this name during the 1980s. Though I’ve some Wilde books on my TBR, this is the first I’ve read, and I think the one that was most ripped from history, for Elena is clearly based on Lola Montez, and the novel is littered with historical figures who Lola Montez was associated with.

The story is rather outrageous in how lavish it is – all kings and jewels and revolutions, theatre and intrigues and murders. Elena has all sorts of interesting experiences and meets all sorts of people. I enjoy the writing (when it was not fawning over the clothing, at least!) and thought the scenes involving dancing where especially well done.

However, Brence – Brence! I hated him. What a lily-livered knave, an absolute asshole. He certainly does not deserve to be the person that Elena pines for the whole book, but I did not like him even at his introduction. Is a romance any good if you despise the object of affection? The mere fact of her love for him reflects terribly on Elena’s personality and judgment, though I rather liked her otherwise.

Ultimately a decent read, but really just a book to pass the time.