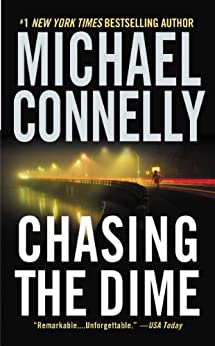 This book isn’t my first non-Bosch based Michael Connelly book, but my second.  I think I read the first one last year (Void Moon) when I wasn’t actually participating in CBR.  Unfortunately, I didn’t like that one either!  I think I just love the characters in the Bosch books, including the character of Los Angeles.  Anyone who says that LA isn’t a character hasn’t read a Bosch book.

Anyway, this book is about a guy who’s doing some kind of AI / tech / computery stuff that I DID NOT UNDERSTAND.  That wasn’t really the problem.  I just didn’t like the character of Henry Pierce.  He did a LOT of dumb things.  I found myself shouting at him, which is fun in a horror movie (Don’t go in that room!), but less fun in a mystery / thriller book that’s supposed to be believable.

Henry is trying to get a big donor for his computery project.  He gets a new phone number that leads back to an escort on a website he found.  People call him looking for Lilly.  Of course he gets obsessed with figuring out who Lilly is, where she lives, what happened to her, blah blah blah.

He does a variety of stupid things, like breaking into her house, chasing around bad guys, and neglecting his work.  Again, I do not like to read about people doing stupid things.  It annoys me, and I do not read to be annoyed!

I gave this book three stars, but I could’ve just skipped the whole thing?  I don’t really recommend it.