> FAQ Home
> Genre: Fiction > Gentrification Meets Get Out in Brooklyn 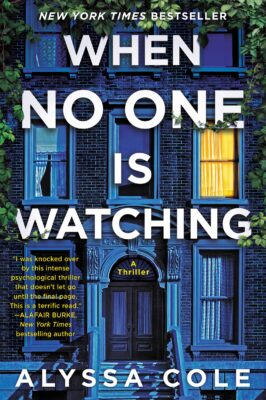 I couldn’t put down this book after starting it. I burned through it in one and a half days, because sleep,  it it was engaging all the way through and the ending was insane. Loved the story, as it’s something that resonates with me (gentrification in NYC has gotten so bad and so many people have been displaced/ out priced because of it). I also loved the slight sci-fi elements of this book, a turn I was not expecting as it starts out as a psychological thriller.

We are introduced to Sydney, a millennial Black woman who has recently moved back in with her ailing mother after her abusive marriage ended in divorce. Sydney and her family have been long standing residents in the fictional neighborhood of Gifford Place, Brooklyn. A predominately middle class Black neighborhood, the residents are noticing a significant change as more affluent white families begin buying up property and moving in. But it’s not just the new neighbors or the circling real estate agents that is giving the community pause – it’s also because strange things have been happening to it’s residents. An honor roll student from a nurturing family is seemingly arrested out of nowhere for selling drugs. Longtime neighbors disappear from one day to the next and their homes are immediately being put on the market to white buyers. Sydney herself is being harassed by one particular real estate agent, hounding her for her mothers prized home. Not just that, but the debt collectors won’t stop calling, looking for her mother who, Sydney says, is in a nursing home. The new changes deeply affect Sydney, but she isn’t sure if she is overreacting to these changes, as the emotional manipulation and gaslighting her ex husband inflicted on her still make her question her thinking.

Surrounding her home are new sets of White neighbors, including Theo and his Lululemon Ponytail wife, who moved in across the street. Theo and Ponytail have a failing marriage and he has been relegated to living in the attic of their new home as Ponytail makes endless renovations. While he has welcomed learning more about the community they have moved into, Ponytail can’t seem to be bothered and hates everything about their new neighborhood (a very real attitude shown by gentrifies in my experience) and hopes that there will soon be more residents “like them” to make it more welcoming. This eventually leads to Sydney and Theo connecting, as the community board pushes Sydney to develop her walking tour of Gifford Place, highlighting the accomplishments of its Black residents as a way to reclaim their identity. Theo excitedly agrees to help Sydney with this endeavor, as he is intrigued by her knowledge and wants to learn more about his new neighborhood (and also finds her extremely attractive).

What follows is a tangled web of discovery, from racist allegations to coverups to downright insidious disregard for human life. Cole tackles not only gentrification and black erasure from American history, she also incorporates themes of white supremacy, classism and white female fragility into this book in order to show that even when Black Americans have created their own space to prosper, White supremacy is lurking in wait for the perfect moment to snatch away their success. Drawing inspiration from Jordan Peele, specifically his film Get Out, I hope this book is adapted soon and that he produces this adaptation as a limited series.