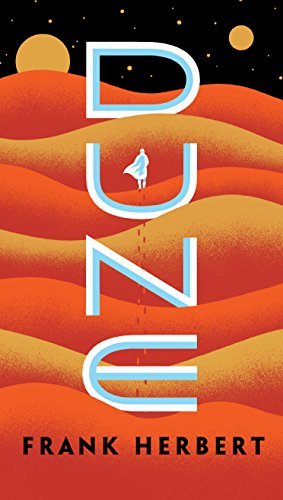 My dad read this book a long time ago.  It was originally published in 1965, but he read it in 1983.  I’m sure he told me about it later (I was only 2 in 1983), because I remember him talking about it.  I also have vague memories of watching the original movie.  They aren’t good memories.  I guess they’re not necessarily bad, they’re just weird.  I remember the worms, and I remember a very large bad man.  I guess I also remember the blue eyes.  I think the 1984 movie is on HBOMax right now, so I’m totally going to watch it one of these days.

I watched the 2021 movie just over 2 weeks ago, and that’s what made me want to actually read the book.  Holy crap was that movie good.  I love that the 2021 movie added in more diversity in actors.  Kynes was a white guy in the book, and she’s a black woman in the movie.  Duncan Idaho is Hawaiian (and whatever other nationalities Jason Momoa represents).  Most noticeably (to me at least), Chani is a black woman in the movie.  It makes sense that the Freman are darker skinned, as they live in the desert.  Everyone was white in the 60’s though apparently.

Anyway, the book.  I borrowed the ebook from my library.  You get to borrow books for 14 days from my app, and it took me about 13 to finish.  I read this book nearly every night for those 13 days.  I stayed up late every time because I just could not stop reading.

There probably isn’t much to say about this book that hasn’t already been said, so I’ll just use pictures from the movie!

I’m glad I watched the new movie first, because as I was reading I totally pictured Timmy C as Paul:

who is still an Atreides even in the middle of the desert.  I’ve never seen Timothee in anything else, but he’s probably going to be Paul to me forever!

Unfortunately you only see her in dreams, and for a few minutes in the flesh at the end of this movie.  She’s going to play a much bigger part in the next movie though, and I can’t wait!

Oscar Isaac was an awesome Leto, and somehow Josh Brolin convinced me of his Gurney-ness.

It took a while for me to realize that Stilgar was Javier Bardem, but like duh, how do you miss that face?

They made us wait a little while to see a worm, but it was pretty glorious when it appeared.

I didn’t really summarize the book at all, but you guys can read a summary anywhere.  I loved this book.  Sometimes books get long and boring with too much world building.  I don’t think Frank Herbert knows how to do that, because I loved every minute of the details he included.  I pictured Arrakis from his words (with a teensy bit of help from the movie).  I pictured the fight scenes.  I definitely pictured the actors from the movie when I was reading the book, BUT the 2021 movie only covers about the first half of the book, so I had to picture everything after the movie ended on my own with just the author’s words.  It didn’t disappoint.  Each new character was vivid in my brain.  Each new setting had just enough information for me to feel like I was there.

Duncan Idaho says “Read this book – you won’t be disappointed!”