> FAQ Home
> Genre: Fiction > It was the worst of times 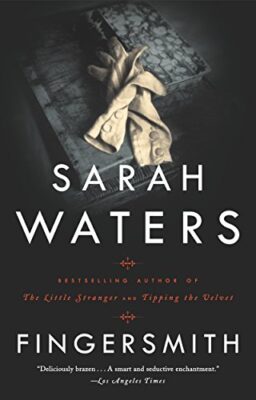 Fingersmith is award winning historical fiction set in 1862 London and at a country manor known as Briar. Like a Dickens novel, it features thieves, asylums, poor, rich and table turning, but this work also focuses on women, sex, matters of power/agency and the lack thereof.

The story is told in three parts: two from point of view of Sue Trinder, a 17-year-old orphan and fingersmith (thief), and one from point of view of 17-year-old Maud Lilly, who is an orphan and an heiress. Both girls find themselves limited and imprisoned by their sex and their circumstances. Sue, who is illiterate, has no hope of a life beyond what she has living in the slums of London but seems ok with that. Her “family” is a group of other thieves and fencers (i.e., people who quickly sell stolen goods) whom she assists and who have looked out for her all her life. Mrs. Sucksby, who has treated Sue like a daughter, dotes on Sue and has a special fondness for the girl whose mother was a gifted thief and a murderer. Sue’s mother was hanged at the gallows visible from Mrs. Sucksby’s attic. Mrs. Sucksby takes in babies for money, a kind of nursery/illegal orphanage. Some babies go back to their mothers, some to other mothers and some die. Mr. Ibbs, the “father” of the house, is a locksmith but also skilled at fencing goods. With his forge and his assistants, he is able to melt down metals and eliminate distinctive markings on stolen items. In addition to Sue, a couple of other young people round out this unorthodox household, as well as a man in his twenties named Richard Rivers, aka “Gentleman.” Gentleman is educated and knows how to pass himself off in higher social circles. When he arrives at Mrs. Sucksby’s one cold winter evening, he has just come from Mr. Lilly’s country manor called Briar. Mr. Lilly is a wealthy and eccentric man who is compiling some sort of literary index. He has hired Gentleman to assist him with this and to teach painting to his niece Maud Lilly. Maud is an heiress who will receive a great fortune when she marries, and Gentleman has a scheme that, as he tells Mrs. Sucksby and the rest, will make them all rich. He proposes to marry Maud and then put her in an asylum, taking her inheritance for himself, but he will need Sue’s help to do so. According to Gentleman’s plan, Sue will become Maud’s personal maid, persuading the young woman to fall for Gentleman. The young lady has already shown an interest in him and this needs to be encouraged. If Sue helps and they are successful, she will get 3,000 pounds. While Sue is nervous about this plan, she wants very much to get that money for herself and Mrs. Sucksby, so they all agree to make this work. According to Gentleman, Maud is a “pigeon,” a very naive and pliable young woman, so the risks should be minimal and the payoff great.

Maud, like Sue, is a 17-year-old orphan. Her mother, Mr. Lilly’s sister, died giving birth to Maud in an insane asylum. Maud spent the first decade of her life raised by the nurses of that institution and was actually happy there. When Mr. Lilly finally sent for her, it was to turn her into his personal secretary. What we learn in the chapter told from Maud’s point of view is that Mr. Lilly’s “index,” which he seems to have spent his entire life working on, has to do with pornography and sexually provocative literature. Mr. Lilly is a tyrant toward Maud, and among her duties is reading sexually explicit passages from the novels in his collection out loud to the “gentlemen” who visit Mr. Lilly’s home. These men are all purveyors of pornography and pornographic literature, and having a sweet looking teenaged girl read it to them gives them a thrill. Maud knows that her uncle will never let her leave him; she will always be his secretary, stuck in the gloomy house with the few servants there. Richard Rivers is a handsome young man who seems to know how to behave properly to a young lady and his presence in the house brings just a little joy to Maud.

When Sue arrives at Briar, in a deep fog (both literally and metaphorically, as we later learn), she finds the place cold, damp, gloomy and dull. Maud is another matter still. She is a somewhat pathetic figure, wearing childish, unstylish clothes and always in gloves. Her uncle insists on this because he cannot bear the thought of anyone’s bare hands touching his books. Maud makes daily visits to her mother’s grave and seems lonely and awkward. Once Gentleman returns to Briar and begins teaching/courting Maud, it seems that Sue’s job will be quite easy. Yet Sue finds herself becoming very unsettled about it. Not only does her better nature struggle against setting up this young woman for harm, but Sue and Maud become closer and more intimate with each other. By the time Gentleman proposes to Maud, she is unsure of whether or not she wants him, and Sue is finding it more and more difficult to do the job she agreed to do.

This novel is full of unexpected and delicious twists and turns. When I finished reading part 1, I was stunned and had firmly decided which character I was supporting. It was clear who the good guys and bad guys were. Then I read the next part and realized the story and characters were more complex and complicated than I had thought. Part three had me on the edge of my seat. I have seen this work described as “Dickensian” due to the time period, setting and characters. I haven’t read enough Dickens to be able to say much about that but based on the little I have read it seems pretty accurate. But what Waters does that is so extraordinary, in my opinion, relates to her female characters and their relationships to each other. While it is true that men exert enormous control and power over women in all spheres of life, the relationships among women are complicated. One might expect a kind of solidarity amongst women all thrown into the same boat, but of course they aren’t all in the same boat. Class matters. Family matters.  Who you define as your family matters. Your sexuality matters, too, and while Mr. Lilly’s interest in pornography is something that “good society” might find distasteful, it is more acceptable than, say, gay/lesbian relationships, which are part of the story here as well.

If you enjoy historical fiction and are interested in reading novels that feature lesbian characters and relationships, I recommend this novel as well as Waters’ other works (I reviewed The Paying Guests a few cannonballs ago and it’s also excellent).