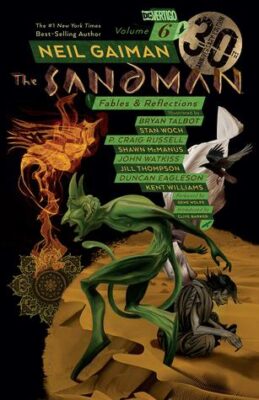 I liked this one though Dream feels like a bit player in most of these stories. There’s is a darkness in all of these stories though. I don’t know which one affected me the most, probably the story of Augustus Caesar. I am going to rate these stories separately since they really do feel like a series of short stories that are just taking place in the world of The Sandman.

“Fear of Falling” (3.5 stars)-Not a bad start. We all have had those dreams where we are falling and we always know that if we touch the ground we die. I am a weirdo though, I always know it’s a dream and I say you will fly and I do or I bounce. Anyway, back to this tale, we follow a playwright (I think) who is worried about staging his upcoming play. He gets some encouragement (if you want to call it that) from Dream.

“Three Septembers and a January” (5 stars)-So this is weird. I recall hearing about this man (Joshua Abraham Norton) but maybe in a grad school class, and like as an anecdote. Gaiman has us follow Joshua as he becomes the subject of a bet between Despair and Dream. Norton gets what he wishes for (via Dream) to be Emperor of the United States. We get to see Dream, Despair, and even Desire roam throughout this story as some of bit players like others like Joshua, Samuel Clemens (Mark Twain) come in and out. I ended up looking up Norton after this tale and thought his story though a bit sad, was also kind of heart warming in some aspects. Especially with how the people of San Francisco treated him.

“Thermidor” (4.5 stars)-The only reason why I gave this 4.5 stars was that some of the panels were so hard to read. It’s just the way the cursive text looks and it makes me have to hold the graphic novel up close to my face. When it’s more or less in print I can see quite fine. Anyway, this story revolving around Lady Johanna Constantine and her doing what she can to help Dream with a favor. We also get to see Dream’s son Orpheus in this. This story ends up setting up things nicely for another tale in the series.

“The Hunt” (4 stars)-A grandfather tries to tell his uninterested teen granddaughter a story involving werewolves. Not going to lie, my mind wandered a bit here and there.

“August” (5 stars)-A really dark tale of August Caesar. We find out why the Emperor chooses to dress as a beggar one day a year and how it all ties back to his uncle.

“The Song of Orpheus” (5 stars)-In this retelling, we have Orpheus as the son of Dream and Calliope. We follow Orpheus upon his marriage to Eurydice. I think most of us know this Greek tale, but this one is given new life with the illustrations and the almost sad end of Orpheus. You get to see how Death and Destruction got caught up in this and why Dream and Calliope had a big falling out.

“The Parliament of Rooks” (5 stars)-Baby Daniel who we all met in Season of Mists returns and visits (via a Dream) Cain, Abel, Eve, and Matthew. FYI, Cain has some anger issues. And I liked Abel, though I do want him to kick the crap out of Abel once in a while. I also liked the introduction of Adam and his three wives in this tale.

“Ramadan” (5 stars)-Caliph Harun al-Rashid rules Baghdad, but wants to make a deal with Dream so it can stay as perfect as it is forever. Of course things are never what they seem. I liked this as an ending of these tales.