> FAQ Home
> Genre: Biography/Memoir > “I still knew I was going to keep my lion and train him.”

Here Keller — Train This is about the life of George Keller, who yearned his whole life to become a lion/big cat trainer at the circus, but ended up being an art professor at State College. One day, his friend ships him a mountain lion in a crate with a sign on it saying “HERE KELLER — Train This.” His friend does this as part joke and part challenge, as everyone knows how much he loves training animals. He takes it home and decides to actually train it, despite only having trained dogs, a wolf, and some cats before. He does, sells it to a circus, and then buys more and more big cats and forms an act. He starts touring the act and eventually quits his job and goes full-time. Cue the triumphant music, etc (the last chapter is called “Triumph.”)

I learned a lot about animal training from this, but I felt that this was a surface level autobiography. It makes sense considering the sheer show business energy that comes off the pages, but the last circus memoir I read felt more authentic to the person. I also felt awful for his wife Eleanor, who did not sign up for any of this and thought she was marrying an art professor she could settle down with. Keller feels that G-d meant him to do this, and throughout the book points to the divine presence causing events or leading him down the path to train lions. I respect that line of thinking, but it felt like Keller would have taken any excuse to get out of what he clearly felt was a stultifying life in a small town. He talks a lot about how he was trapped and how he needed to escape, and I just kept thinking about Eleanor with two small children being left behind, while he keeps spending large amounts of money on more animals and equipment. The danger of the animals is apparent, and Keller describes several near-fatal accidents, including one where he gets his head stuck in a lion’s mouth and suffocates. He’s dead for three minutes from air loss until they manage to revive him. He also gets clawed a few times, animals escape, kill each other, get killed by illness and weird accidents, there’s a serious truck crash…all of which is to say I could understand why Eleanor would not want him to do this!

But he manages to escape and then they decide to divorce, he meets a beautiful singer and gets re-married, and then he gets hired to be in Ringling Brothers and Barnum and Bailey. The book ends with him at the triumphant peak of his career, with everything he ever dreamed of. Unfortunately, he died of a heart attack in the ring just as the book went to press. It was bittersweet to read that, because I was really happy that he managed to achieve his lifelong goal, but I also wish that he’d gone for it sooner and had more time to enjoy it. I guess there is a real lesson in there not to wait and to go out and chase what you want.

Enjoyable and informative, with lots of shocking moments, but there’s a reticence or a smoothness to the narrative that made me feel not fully connected to him and like there was more to the story. Also, the amount of awful stories about animals dying or getting hurt makes this a hard read for anyone who loves animals. Recommended for the historical circus fan. 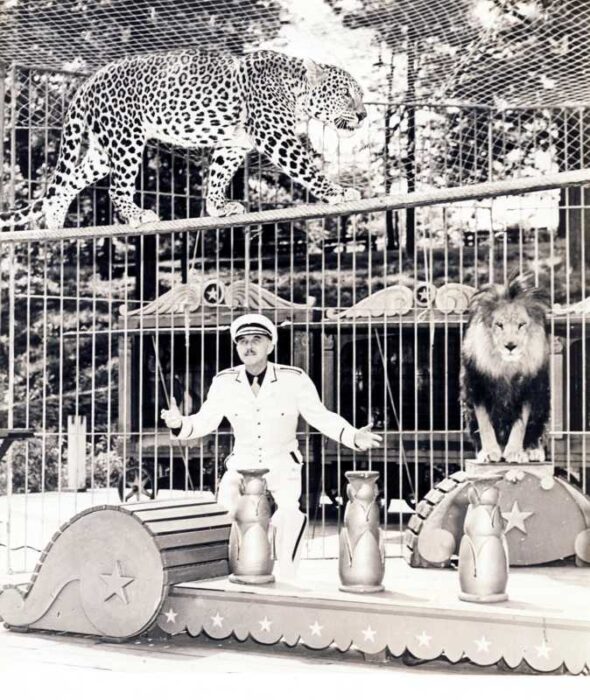