After the debacle of Always, in December I decided to make sure the next thing I read didn’t make me angry (don’t worry, future angry reviews will come – and soon –  I just usually like to give myself 24 hours to get eloquent with the rage) so I put down the two books I was reading and went back to an ARC that I had not been able to get to before the deadline (my apologies to the fine folks at NetGalley and Berkley) because I know a Jackie Lau romance is going to make my heart happy – and Donut Fall in Love is no exception.

There is a certain alchemy to the way Lau writes books that feel like sitting down with a quick snack and a cup of tea, while also making them steamy. I am on the record of being all for it. Lau is an author who knows how to include excellent food in her books and this one made me daydream about the donut shop my sister used to work at, but its more than that. I enjoy reading along as two people are dumb about their feelings, get less dumb about those feelings at different rates, and eventually stop being dumb about their feelings and Lau nails that as well. But that is not all that is happening in Donut Fall in Love as Lau unpacks some bigger emotional truths, in this case how we handle grief and how it interacts with larger family dynamics. 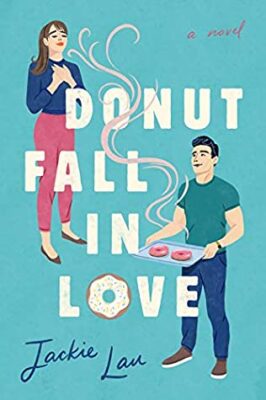 We join the story as actor Ryan Kwok has returned to Toronto following completion of the promotional tour for his latest film, a rom-com staring Asian leads that is getting less-than-stellar reviews. The recent death of Ryan’s mother and years of constant work have led him to take some time off near his remaining family to be supportive and connected. He struggles, especially with not knowing how to talk to his dad—who now trolls him on Twitter instead of talking to him on the phone. Our meet cute happens when Ryan collides with baker Lindsay McLeod at her shop and knocks two dozen specialty donuts onto the floor. Lindsay lingers in Ryan’s mind and after he signs up for a celebrity episode of Baking Fail (think Nailed It), he asks Lindsay to be his baking instructor. As Lindsay and Ryan spend time together, they begin to form a bond and things heat up in the kitchen, and outside of it.

Donut Fall in Love shares some ground with Lau’s previous book The Professor Next Door with a heroine who is settled into her career and life, building a version of herself she believes she wants. Lindsay has sworn off romantic relationships following some emotional scars years earlier, instead enjoying casual hook-ups in the intervening years. Lau sets up her leads with emotional baggage that is relatable to the reader and matched to each other, in this case a shared lack of serious relationships in their recent pasts, while also providing hurdles to be gotten over – specifically Ryan’s fame and the intrusions it causes into their otherwise quiet lives. In this book we watch the pair grow into a functional relationship which showed growth for both parties, even when it felt as though the characters were too easily falling back into the same mental loops. The only drawback here is that sometimes Lau falls back on telling the reader how the characters are feeling, instead of letting the characters’ behaviors and actions do the speaking.

This felt more like Ryan’s book than Lindsay’s even though the narrative is split between them, but I do not think that was a negative. Also, in the “not really a negative” category is I wonder if Lau turned her steaminess down a smidge with this book as it is her pub trade debut. While steamy, this was not exactly the steam level I am accustomed to in works such as her novella A Big Surprise for Valentine’s Day.

3.5 stars, rounded up for enjoyment.

I received this book as an ARC from the publisher via NetGalley, it has not affected the contents of this review. Donut Fall in Love published October 26th, 2021.