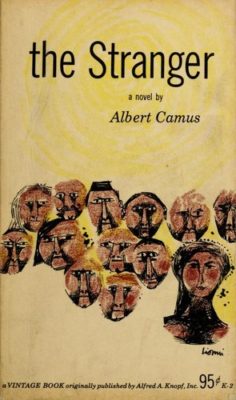 Meursault learns that his mother has just died. This news has no discernible effect on him other than he requests off from work to attend her funeral and burial. He displays no typically displays of grief and returns promptly to his life; hardly anything has changed. He starts dating an old acquaintance; he helps his friend with some relationship problems; he goes on vacation. Then, Meursault murders a man. All of the recent events and Meursault’s character are discussed and argued over during the trial, all the while Meursault ponders his life, his fate, and his position in the universe.

I first read this book as a high school student and remember really enjoying it. Rereading now as a 30 year old, it is incredible how much this book has influenced my thinking and how I relate to the world around me. Camus was a philosopher of the Absurd. He believed that there is an inevitable tension between the desire for people to find value in the universe and the inability to do so due to the fact that the universe is a physical, uncaring, object. Camus believed that one’s greatest goal in life should be to accept and embrace this contradiction and tension. This philosophy is most evident in the final passage of The Stranger in which Meursault “for the first time,…, [he lays his] heart open to the benign indifference of the universe” which makes him “realize that [he]’d been happy, and that [he] was happy still.” Meursault’s outlook on life reminds me of a poem (of which I have partially tattooed on my leg) by Stephen Crane called “A Man Said to the Universe”:

A man said to the universe:
“Sir, I exist!”
“However,” replied the universe,
“The fact has not created in me
A sense of obligation.”

Camus’ writing style has been compared to Hemingway’s in that he writes in short, terse sentences where often what is not written is just as important as what is written. For me, this style of writing just isn’t my jam, though it makes perfect sense in the context of this novella. I find more and more that I enjoy beautiful prose overflowing with imagery and poetic language over to-the-point writing.