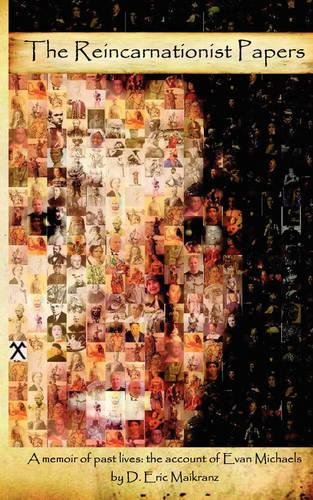 I had a hard time sorting out my feelings about The Reincarnationist Papers after I finished it: even a couple of weeks later I’m not sure if I’m judging it by its own merits, or by the merits of the story I kept hoping it would be, or if I just totally missed the point.

There’s one hell of an elevator pitch buried in the heart of this meandering story, one that makes me very curious about the upcoming film adaptation. Millenia-old reincarnated immortal being hires wee baby reincarnated immortal being to steal an antique portrait of himself. The fact that this punchy, poppy hook first appears about 250 pages into this 350 page book tells you something about the kind of experience you’re in for.

But I’ll set that aside and do my best to judge that experience for what it is. It’s interesting enough that it kept me reading. It also kept me glancing at the “pages remaining” counter on my e-book, watching the number tick down and down and wondering when something was finally going to happen. That isn’t a knock on the quality of The Reincarnationist Papers, by any means: maybe I was hoping for some action, but there’s something to be said for a slow, shaggy hangout story, and it’s got a varied, interesting cast and some very cool historical asides.

It’s also got moderate “men writing women” problems, some gross subtext to its sexual politics, and maybe the worst case of “people don’t talk like that” syndrome I’ve ever encountered. (That is a knock on the quality of The Reincarnationist Papers.)

Take, for example, this excerpt:

“I peer into the main room and it’s full of people grinding on a dance floor below the altar. Some out-of-town hardcore gothic band is blaring from the short stage behind the pulpit where the lead singer stood, while naked men and women covered in different-colored body paints are dancing in cages on either side of the band.”

The book is in first person…but that line isn’t narration. That’s a piece of spoken dialogue. That’s a career criminal, in an LA dive bar, telling a buddy his new girlfriend is seriously bad news. It knocked me out of the moment so hard I actually laughed out loud. (How kind of him to establish the positioning of the band and the height of the stage: that’s definitely vital scene setting to tell your friend that his new girlfriend supplies parties with suitcases full of drugs. And who would have guessed that the naked dancers at a wild rave were painted multiple colors!) Okay, I’m nitpicking a bit here, but you get my point. All  the dialogue is like this, and I think it’s the root of the main problem I had with this book: the way the characters talk is so far from the way people talk that it’s damn hard to figure out what kind of people the book wants them to be.

Nowhere is this more apparent than in the character of ur narrator and theoretical protagonist  Evan Michaels, aforementioned wee baby immortal (and professional arsonist, a fact that has shockingly little impact on his story or his character.) Evan is struggling through life, doubting his sanity after he turned 18 and started regaining memories of his two previous lives. After an arson job gone wrong, he’s rescued by a mysterious woman (exotic, beautiful, silk clad, elaborately tattooed, you get the picture) who just happens to be one of the very few people like him: infinitely reincarnating, functionally immortal souls whose memories stretch back hundreds or even thousands of years. (Does she immediately want to bone him?  Of course she does.)

And then, not a whole lot happens for about 250 pages. Evan’s rescuer, Poppy, sponsors him to be inducted into the super secret club of immortals, the titular Reincarnationists. Between  meeting Poppy at the beginning and the art heist squeezed in at the end, most of the book consists of Evan wandering around listening to stories, having slightly gross sex scenes with Poppy, and recounting memories of his past lives to earn his place as a Reincarnationist. (The Reincarnationists, it turns out, mostly use their immortality to amass a ton of wealth, eat a ton of food, argue about philosophy, and do a ton of drugs. The Bone Clocks, this ain’t.)

Like I said, that’s not necessarily a bad thing. The history-hopping life stories of the other Reincarnationists are easily my favorite parts of the book: extremely well-researched and packed full of detail about places and cultures that will probably be new to many readers. Sure, they all talk like they’ve got New Yorker stories printed on the backs of their eyelids, but I can suspend a lot more disbelief for the 1,000 year old dude talking about traveling with the Conquistadores. Unfortunately, the Reincarnationists’  stories are short asides, and then we’re back with Evan and Poppy.

I wrote a lot about Evan here, but I can boil it all down to this: Evan kinda sucks. I genuinely am not sure who  this character is supposed to be. A sympathetic hero with a poetic soul? A helpless victim in over his head? An arrogant moron charging headlong into his own undoing? (A sulky non-entity with very little impact on his own story?)

Poppy’s character, on the other hand, has no such ambiguity. Poppy is an amoral disaster with too much money and power to actually crash and burn. Immortality made her a perpetual motion machine of sleaze and hedonism and she’s the most entertaining part of the story by a mile. Forget Evan, I want another 400 pages of Poppies through the ages, getting blackout drunk and starting duels for stupid reasons. She does not have a single redeeming quality and I absolutely love her. But hoo boy, this book has some weird feelings about Poppy.

See, I get the feeling that the book and I have very different opinions about what Poppy’s worst actions are – so much so that I wonder if I’m missing something. She lies to Evan, leaves him in the dark, pressures him into doing opium with her, and almost seems to be setting him up to fail in front of the other Reincarnationists. But the worst thing she does, the final straw, the betrayal Evan can’t overlook…is inviting him to join her in having sex with other men. Other men who, the book makes very very clear, are gross-looking. And that’s where The Reincarnationist Papers loses me.

It’s the age old problem: a woman’s sexuality is a wonderful thing, as long as it exists for the pleasure of a man. Never mind that she’s pretty explicit that she doesn’t do monogamy and doesn’t intend to be exclusive: she’s using her sexuality for her own pleasure, in a way that Evan finds icky, and that’s the bridge too far.  But then again, the first person diary hook means the book’s point of view is Evan’s point of view…so I’m left wondering if I don’t like the book, or if I just don’t like Evan. (Was I even supposed to like Evan?)

There’s a lot of good ideas in here, but the dialogue is so unnatural that neither the character of Evan nor the story ever gelled for me, and the way it treated Poppy leaves a bad taste in my mouth. There’s so many ideas and story threads that never really go anywhere or amount to anything, like the whole book’s framing device: a historian found and is translating Evan’s journals, which as far as I could tell contributed nothing but a few footnotes about historical trivia. Evan spends most of his own story following other people around, feeling confused or betrayed and not really having much agency…and I think that might have been the point. Or it might have been weak characterization. I’m not sure.