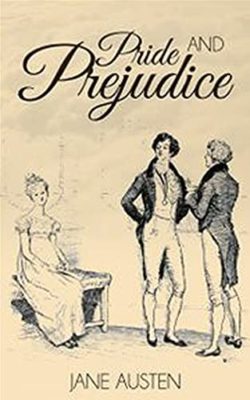 Pride and Prejudice is my favorite novel of all time. As I believe I have related before, it is the first and only book that I’ve read which, upon finishing for the first time, I immediately returned to page one and read it all over again. For many years, I did a reread around the holidays as a gift to myself. My first ebook download was Pride and Prejudice. I’ve seen a couple of the adaptations (the definitive A&E/Colin Firth/Jennifer Ehle series, and the perfectly fine 2005 movie with Keira Knightly) and I’ve watched them multiple times, but it has been many years since I read this classic. It still brings me as much joy today as it did upon my first reading 39 years ago.

Pride and Prejudice is considered part of the Western “Canon” and begins with one of the most famous opening lines in literature:

It is a truth universally acknowledged, that a single man in possession of a good fortune, must be in want of a wife.

From here, Jane Austen takes the reader into the world of English manors of the early 1800s and the privileged class of gentlemen and women who inhabit them. P&P is a comedy and a romance that deals with matters of class, reputation, and manners. The Bennet family live on a manor called Longbourne in the village of Hertfordshire. Mr. Bennet is a gentleman of moderate means at best. He has five daughters and his manor is entailed to a distant male relative since Mr. Bennet and Mrs. Bennet were unable to produce a male heir. Mrs. Bennet is obsessed with making good marriages for her daughters and upon the news that a Mr. Bingley, an eligible young man of some wealth, has leased neighboring Netherfield Park, Mrs. Bennet is determined that he will marry one of her daughters.

The Bennets are what we might call a dysfunctional family. Mr. and Mrs. Bennet’s marriage lacks much in the way of love and respect. While Mr. Bennet is an educated man, his wife is a vapid, flighty, superficial sort of woman who charmed him in their youth but whose lack of intelligence soon came to the fore and undermined what little regard he might have had for her. Their two youngest daughters, Kitty and Lydia (the youngest at 15) are much like their mother and spend their days obsessed with bonnets and balls. Mary is a dull pedant who enjoys moralizing and playing the piano. The two eldest daughters, Jane and Elizabeth (Lizzy), stand out for their beauty and intelligence. Jane, considered the most beautiful young lady in the district, is reserved and exceedingly kind toward everyone. Lizzy is her father’s favorite, a beauty who possesses wit and humor. Lizzy and Jane are sisters and best friends, and they can see the problems within their family circle, as their mother is prone to hysterics while their father laughs at his family for their silliness but does little to stop them from making themselves look foolish.

The fun starts at the local ball when Mr. Bingley arrives with his party: his two sisters, a brother-in-law, and his friend Mr. Darcy. Mr. Darcy is tall, dark and handsome, and he is even wealthier than Mr. Bingley (he has ten thousand a year to Bingley’s five thousand). Bingley is immediately drawn to Jane, much to the delight of Mrs. Bennet, and he is a perfectly charming addition to Hertfordshire. His pleasing manners recommend him to everyone. Mr. Darcy, on the other hand, comes off as pompous, proud and aloof. He refuses to dance with any of the local young ladies and slights Elizabeth. Lizzy laughs it off, but her negative impression of the proud Mr. Darcy is set. As Mr. Bingley’s interest in Jane grows, his sisters endeavor to know Jane better themselves. It becomes clear, to Elizabeth if not Jane, that Bingley’s sisters and Mr. Darcy are horrified by the social life of Hertfordshire and consider even the best families there beneath them. It doesn’t help that Mrs. Bennet and her younger daughters are constantly embarrassing themselves in public.

While Jane’s prospects with Mr. Bingley seem on the rise, the other Bennet girls have reason for hope as well. The militia comes to town for the winter, which means more social opportunities with eligible young men. One such member of the militia, the handsome and charming Mr. Wickham, draws Elizabeth’s special attention. Lizzy is intrigued to learn that Wickham knows Mr. Darcy and shares her negative opinion of him. And Mr. Darcy, upon seeing Wickham in town, becomes visibly angered by the man’s presence. This makes Wickham all the more attractive to Lizzy, who, due to Jane’s circumstances, finds herself often having to deal with Mr. Darcy and Bingley’s snobby sisters. As if that weren’t enough, Lizzy must also endure the attentions of her cousin Mr. Collins, the relative who will inherit Longbourne and who currently has a position as a minister under the patronage of Lady Catherine de Bourgh — Mr. Darcy’s very rich and pushy aunt. Collins is a simpering, stupid, suck-up who is lacking in social graces. He believes he should marry a Bennet girl due to the entailment, and as Jane seems to be spoken for, Lizzy gets his much unwanted attention. When Bingley throws a ball at Netherfield, it seems as if the entire Bennet entourage are determined to embarrass Jane and Elizabeth, and in the aftermath, instead of Jane getting a marriage proposal, the Bingley party hastily retreats from the country to London. Jane is heartbroken but Elizabeth is convinced that Mr. Darcy and Bingley’s sisters have had a hand in keeping the two lovers apart. Meanwhile, the rejected Mr. Collins proposes to and is accepted by Elizabeth’s friend Charlotte Lucas, much to Lizzy’s horror and surprise. 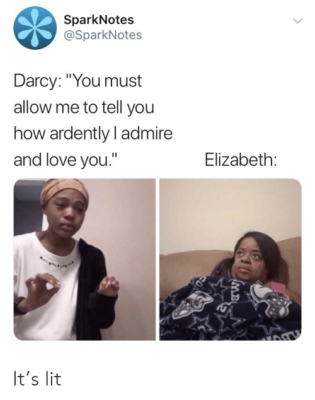 As winter turns to spring, Mr. Bingley remains in London and out of touch with Jane. Lizzy, meanwhile, is invited to visit Charlotte and Mr. Collins, which means she will also meet the imposing and obnoxious Lady Catherine. Much to her surprise, Lady Catherine’s nephews Col. Fitzwilliam and Mr. Darcy are also visiting. Lizzy cannot understand Darcy’s attentions to her and does not hesitate to tease him when the opportunities arise. It is with shock that she discovers Mr. Darcy is in love with her and wants to marry her! His proposal is the source of many a SparkNotes meme, as he manages to turn his declaration of love for her into a put-down of her family and class. Lizzy strikes back expressing her disgust with him and her knowledge of his treatment of Jane and of Mr. Wickham. Darcy is stunned and incensed, and he later sends Elizabeth a letter in which he explains what exactly happened with Jane/Bingley and with Wickham.

Elizabeth’s rejection and Darcy’s letter serve as epiphanies for each character. Both have been guilty of certain prejudices and both can be quite proud. The tale of Wickham’s true character is scandalous, and Lizzy confides the details to Jane. They resolve that due to its shocking nature, they should not reveal it to others, particularly as the regiment is leaving Hertfordshire anyway. Yet this decision will end up having terrible consequences for the Bennet family. Before that happens though, Elizabeth meets Mr. Darcy again by chance while traveling with her aunt and uncle in Derbyshire, and it seems as if their relationship might take another turn for the better until Lizzy gets a frantic letter from home about her youngest sister and her reputation-shattering actions.

Will Jane and Bingley ever reunite? Will Elizabeth and Darcy get together? Or will Lady Catherine, Wickham, and the stupider members of the Bennet family screw it all up for everyone? Well, given that I’ve described this as a comedy and romance and not a tragedy, you can guess that there are happy endings and true love and all that stuff. Austen has created delightful and funny characters as well as clever intertwining plot lines, and even though I know very well how it all turns out, I was on edge in joyful anticipation as I read. Reading this several decades after reading it as a teen, I do appreciate certain details more. Lady Catherine and Mrs. Bennet prove that you can have obnoxious and annoying mothers no matter what your social class. One of my favorite characters, Charlotte Lucas, is keenly observant of the relationships budding and failing about her. She will have to make a pragmatic choice about her life and future, and Lizzy, while finding it horrible, later has to admit that when men make similar decisions, society tends to find it more understandable. I had also forgotten that the novel, unlike the adaptations, provides a good amount of information about what happens to the Bennets after everyone finally hooks up. Austen provides brilliant observations of character and class division, exposing folly and hypocrisy at every turn. As with Northanger Abbey, it is very easy to see how people today are very similar to Austen’s characters in their foibles and prejudices.