The Book Bingo Reading Challenge is Here
> FAQ Home
> Genre: Graphic Novel/Comic > When I say gross, I mean nasty. Do not read this while eating.

Haha, what a weird, gross book. I liked it.

I mean it, if you can’t handle seriously nasty things (mostly involving tasting and smelling, and bodily fluids, and gore) stay away from here. If you’ve got a strong stomach and appreciate a wacky premise, this might be for you. Basically, Tony Chu is a cop, who is a cibopath, meaning he can sense the histories of what he eats.

This basically means all he eats is beets in a variety of forms.

This also means that after getting into a bit of a scrape with his partner involving accidentally learning about a serial killer hiding in a restaurant because he tasted the murder victims in his soup, he is recruited by the FDA to solve crimes by ingesting truly disgusting pieces of evidence; the FDA in this world is the most powerful branch of government. Why? Unsure at the moment, but it has something to do with the fact that, also in this world, supposedly because of a serious bird flu outbreak years back, chicken is now an illegal substance. At the beginning of the series, it’s Tony’s job to track down people who sell and buy chicken on the black market. It’s heavily implied that the government is actually lying about the bird flu, and that something else killed all those millions of people. The chickens are just a scapegoat. Probably. 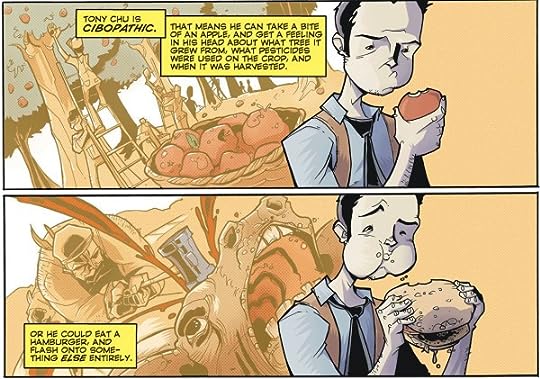 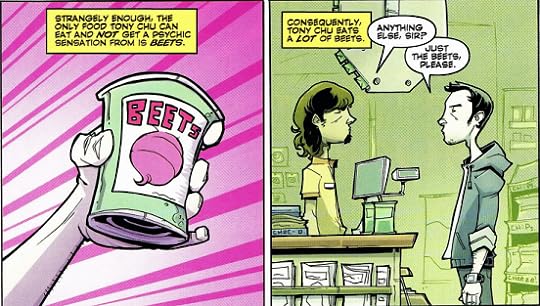 The art was really unique, cartoony but consistent. It was also funny at the same time as being gross. There seems to be an overarching storyline that is just getting started, and some twists and turns even in this first volume. There is also already some very wacky escalations of plot happening, so I can only imagine how weird this thing is going to get by the end. I’ve got Vols 2-5 checked out from the library right now so I’ll probably get to them pretty soon. 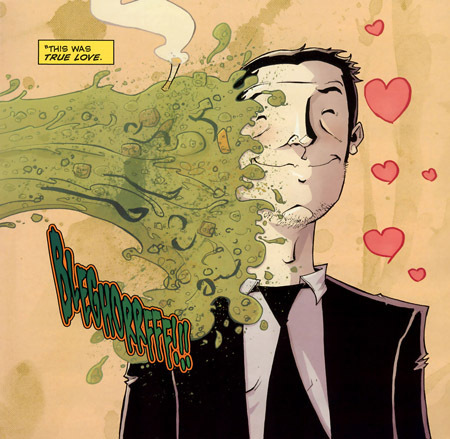