It is obvious from the get-go that Harvey Kubernik, a veteran music journalist who hails from Laurel Canyon, loves his subject. The problem is that love, and the love of his version of the Canyon, may have artificially narrowed his view of his subject. This is no small book, while its dimensions don’t quite fit the definition of ‘coffee-table book,’ it is a large and difficult book to hold that is chockfull of photos which make it a good choice to casually peruse at a table. In fact, I would suggest reading this book that way, as opposed to reading it cover to cover because there is no real sustained narrative here. At times I felt as though I was reading the begats section of the Bible (this musician led to that musician led to this other musician…). 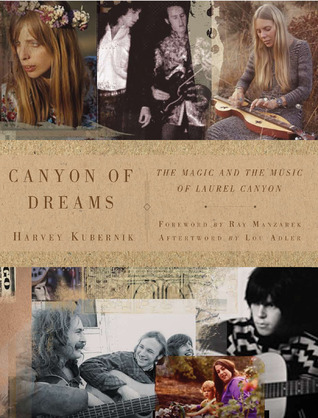 And, alas, this book really isn’t an examination of the Magic and Music of Laurel Canyon as the subtitle promises. It is instead a nostalgic reminiscence with surprisingly varied points of view. Kubernik conducted interviews with figures from the Canyon, including members of The Seeds, The Byrds, Little Feat, Three Dog Night, The Doors, John Mayall, Rodney Bingenheimer, Steve Cropper, Andrew Loog Oldham, Slash, and dozens of others which simultaneously works at uncovering the myths of the area but provides precious little substantial insight into this coveted area outside Hollywood. And, given the return of the Laurel Canyon sound, precious little space is given to its contemporary status.

The book itself is beautifully produced. What I appreciated most was that Kubernik takes us back to the origins of the neighborhood as it began in 1927 with the Garden of Alla (later Allah) apartment complex, at the canyon’s entrance through its time as home to experimental architectural design all before the musicians started arriving in force. But I think if you’re interested in the Laurel Canyon sound you’re better off with the documentary, Echo in the Canyon.

Bingo Square: People (so many who’s who of Laurel Canyon)