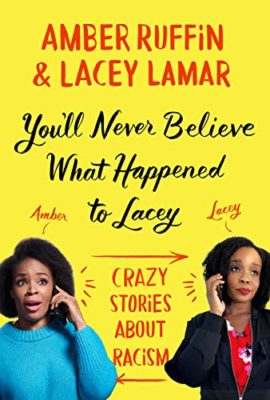 It’s not an easy thing to make you laugh and fill you with incoherent rage but this book manages to do just that. Written by late night host Amber Ruffin and her sister Lacey Lamar, You’ll Never Believe What Happened to Lacy is a series of stories of the everyday racism dealt with by Lacey, who lives and works in Omaha, as told to her sister Amber who now lives in New York. Obviously this is not to say that there is no racism in NYC but as Amber says she is “no one’s first black friend” living there. Add to that the fact that Lacey seems to be the type of person that people just think they can say anything to and well, you can imagine. Actually you can’t imagine. I thought I could imagine but I was sorely mistaken.

Despite the subject matter the tone is fairly light and the sisters are both very funny. I highly recommend the audiobook, which is read by both Amber and Lacey. The stories are frequently cringe-inducing, sometimes frustrating and occasionally enraging but overall they are relatively low stakes. I was never worried for anyone’s safety while reading this book. The fact that both sisters are here and thriving and laughing at all this bullshit helps the reader to laugh along with them while simultaneously shaking their head with consternation.

A lot of books dealing with racism can be emotionally difficult and they should be, but not all of them have to be. They also don’t all need to have life and death stakes involved. Sometimes they can just be about a smart, good humored black professional woman moving through a mostly white world and dealing with the utter cluelessness of her white coworkers about the wider world. It might also be a good gift for those of you that have a clueless white relative (and let’s face it, what white American doesn’t?) to broaden their understanding of racism in this country.