> FAQ Home
> Genre: Science Fiction > “This did not mean that laws and rules were not helpful, or that explanations should not be sought, but rather that there should be no fear in changing them as needed, for nothing in the universe held still.” 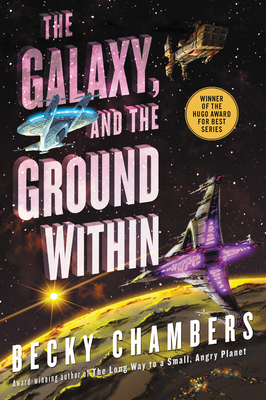 I’m sad this series is over, but I’m glad it exists, and this was a really good one to go out on. Like the other books in the series, there isn’t really a plot. The story is very character focused, and acts as a sort of slice-of-life. I say sort of, because the circumstances here are slightly out of the ordinary.

The whole book takes place over five or so days on the planet Gora, essentially an interstellar truck stop because it intersects with so many wormholes. The Five-Hop One-Stop is run by the Laru Ouloo and her child, Tupo. Ouloo has gone out of her way to make her home and place of business welcoming to all species of aliens who populate the galaxy. Just after three guests arrive at the Five-Hop, a cascade failure in the satellite system means that all travel in and out of the Gora system, and all communications are halted, and everyone is stuck until the transit authorities can get things fixed up and safe again. The three guests are Roveg (a Quelin), Pei (an Aeluon, who we know from book one as being Captain Ashby’s paramour), and Speaker (an Akarak).

Most of this book is about discovery, and about making connections across differences. The three guests and their hosts have little to do except chat and get to know one another, and there are also quite a few differences to overcome (with Speaker especially, whose species doesn’t generally associate with others, for reasons explored in the book). With the exception of Aeluons, we as readers get to learn about three new alien species, even as the characters are getting to know one another. Chambers does an excellent job painting a picture of the universe at large with this little microcosm of alien beings, complete with atrocities still causing ramifications into the present, and grey areas involving the conflict between cultures, even in a galactic society that mostly features beings getting along with one another peacefully.

Not really a book you can read super fast. I found it easier to read spread over several days, just as the characters spend several days with one another. I’ve had that experience with all her books, actually, that they need to be consumed more slowly.

I’m excited to see what she does next!