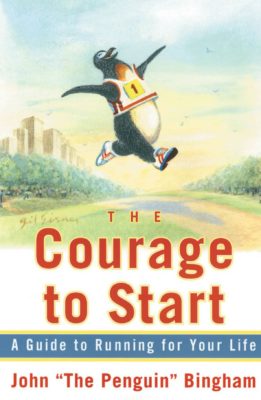 I found The Courage to Start by John Bingham an incredibly inspiring read. Bingham is well known for his writings about runners who are “penguins.” A penguin is a runner that might be slow, have an unusual stride, is often in the far back of the starting line, but is fulfilled. Bingham talks less about the technical aspects of running and more about the psychological and emotional growth that comes from regular practice. While he doesn’t frame it as such, he has a Buddhist way of looking at things: being in the present moment, embracing failure as a teacher as much as success, and the positive emptiness that can come from letting go of our expectations. Which is not to say he doesn’t see the value of competition and setting goals for yourself. But for Bingham, being a runner impacts every facet of your life and goes much deeper than just going faster or chasing personal bests. He sees value in all aspects of running.

The book greatly encouraged me to start my own running practice. I have never been athletic, though I have done some 5Ks and a triathlon way back when. But I am essentially someone who never felt confidence in my body. Not just in appearance, but in function. I resigned myself to never being a physically active person. I was a bookworm, we like to lay around and read a good book. But pigeon-holing myself this way has not served me well. I am currently very unhealthy and carrying far too much weight. I have felt discouraged from even trying to change my circumstances, mostly out of fear of failure, being made fun of, and anticipating all the difficulties and none of the rewards. But Bingham’s book has definitely given me the courage to start.

Bingham went from sedentary to a runner later in life. He is evangelical about the joys and learning opportunities that running provides. But most of all, he encourages readers to find out what is true for them, what makes them happy, what their unique path is regarding running. He reminds us that being in the back, running slowly, running in our own unique way in the context of our unique life is just as good as being the fastest.