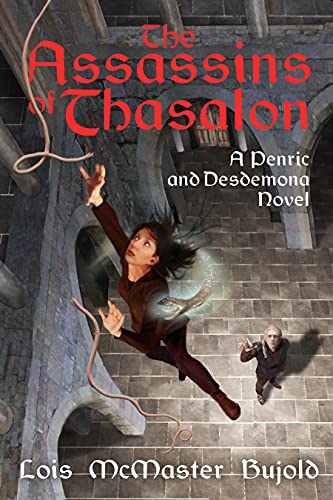 The Assassins of Thasalon is the latest in Lois McMaster Bujold’s Penric series. Most are novellas but we have the treat of a full length novel this time. The plots continues from the last novella  The Physicians of Vilnoc (not last in publication date but in chronology) and is the 10th in the series. Penric is settled down with a young daughter toddling about adorably and another on the way. One of the things I love about this character is his kindness, even though he’s a very powerful sorcerer- due to his very powerful demon Desdemona. Brute  force is rarely if ever his style. In fact it’s usually disdained and seen as a mark of a lesser sorcerer. He instead relies on his considerable intelligence which allows for a good mystery, typically political, in the world of the 5 Gods. The relationship with and power he derives from Desdemona reflects this because the accumulation of her multiple lives makes her a formidable demon whose strength comes from the knowledge of each of those lives- a physician among them. Thus Penric inherits a medical education equivalent to decades of practice and this scientific, critical thinking lens shines through how they approach each of the myseries the occur in the series. His demon’s sheer power is always present but rarely, if judiciously, used because knowledge is often the better approach. It’s refreshing to see a fantasy series emphasise this as it is quite true in our own world.

Penric and Desdemona travel to Thasalon to discover who was behind an attempted assasination of his brother-in-law, General Arisaydia, whom he rescued in the previous novel. He’s accompanied by a saint 0f the Bastard who is as typically eccentric as any of his order should be and an unlikely new student he schools in theology and magic along the way, which allows the reader to gain more detail in this incredible world’s esoteric underpinnings. The plot has a political theme that has been building through the series. The politics and history of the different nations give the plot and characters motivation and depth without overwhelming the reader with details. These books are tightly written and fast moving with strong character development. Relationships, sorcerer to demon, among friends or lovers, play the central role in these books. I hope the author continues to expand on Penric’s role as a spouse and father in future books.

The characters are, as always, absolutely delightful. Bujold’s characters are often morally complex and even her villains are rarely cruel just for cruelty sake. Penric’s new student has a wonderful arc that highlights redemption and second chances and how the circumstances we are born in can cause us to make moral choices at odds with the person we wish to be. Penric often sees the underlying good in people and the series overall is lifted by this hopeful and compassionate perspective. The day this woman stops writing I will mourn deeply because she never fails to delight. I guess that’s why she’s a Grand Master of the genre. Highly Recommend.