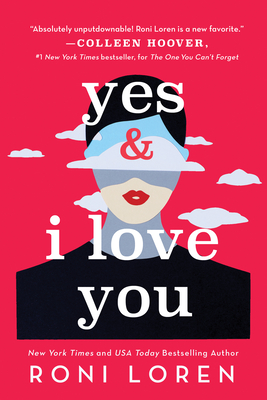 While I absolutely adored Roni Loren’s last series, given the cover of this book, I wasn’t really sure what to expect. Considering that series was about the survivors of a school shooting, pretty much anything would be fluffier, but I was hoping it wouldn’t lose the heat level or angst. And while I was pleasantly surprised by how much of a rom-com it is, all the things I love about her books are still here.

Hollyn is desperate to prove that she can survive on her own. She’s got a job as a respected columnist reviewing entertainment in New Orleans, but she still struggles with severe anxiety, exacerbated by her self-consciousness over her Tourette’s, which manifests mostly as facial ticks for her. Her therapist’s latest assignment has her dutifully renting a space at a co-working location, but when she has an embarrassing encounter with the new coffee barista, she’s not sure she can stomach going back. Jasper can’t figure out what the cute woman has against him. Being a barista isn’t his dream job, but it helps pay the bills while he continues working with his improv comedy group. But Jasper and Hollyn strike up an unlikely friendship, and when her boss gives her an ultimatum, she turns to him for help. But as lessons in improv to help her get more comfortable in front of the camera turn into improv for dating, neither’s prepared for the reality of their feelings for each other.

I adore Hollyn. Her struggles with adulting are highly relatable, and she’s just so incredibly courageous. At times in the book, it feels like everyone who was supposed to be rooting for her was instead focused on keeping her safe, without realizing it was keeping her from living her life. Her therapist and Jasper are the only people who encourage her to step outside her comfort zone. Jasper makes it safe for her, and I love him for that. Sure, he’s funny and hot and does things like bring her anthropomorphic coffee, but he also sells her on how freeing setting out to make people laugh at you can be. Jasper’s not without his own adulting issues. What he sees as following his dreams looks like chasing a pipe dream to others. Even his improv group is wary of him because they were burned before when he dropped everything to follow his girlfriend to LA, and when he bombed his audition and she didn’t, she dropped him. People tend to think of him as flighty, and he’s blown away that Hollyn trusts him enough to have him help her with something so important to her career.

I know nothing about improv comedy besides watching Whose Line? reruns year ago, but I thought all the tenets of it, from the “yes and…” to using the alphabet was explained very well (and, in the case of the alphabet one-liners, extremely sexily.) Hollyn and Jasper have undeniable chemistry, and it was just as steamy as her previous books. Their relationship – both improv lessons and sexual – gives Hollyn a chance to explore what she wants in a supportive environment, and that ends up extending to Jasper as well.

There’s a bit of a love triangle (two actually) in the story, which I didn’t really love. I think it did display Hollyn’s growth – her choice between something that was safe but not exactly what she wanted and something that was outside her comfort zone but that she desperately wanted. I also loved how, when Jasper tried to pull the “he’s the better man for you” shtick, Hollyn completely trounced it.

“You’re a mess.”
Andi patted Hollyn’s knee. “Told ya. Don’t go around thinking everyone else has it together. We’re all just falling apart in different ways.”
“That’s depressing.”
Andi shrugged. “Meh. Or comforting.”

I adored the mental health rep. Though I’m not very familiar with Tourette’s, it felt like things were handled respectfully. Besides her anxiety, Hollyn (and her friend Cal) have Tourette’s, while Jasper has ADHD. At one point, she actually has a therapist appt (via text!) and talks through some of her relationship issues, taking ownership of things she knows she needs to work on. I love seeing characters work on their mental health, especially when it’s made clear that it’s hard work and a continual process.

“Andi’s smile went full grin, and she clasped her hands together at her chest. “Did we just start a lifelong friendship?” She gave an exaggerated nod. “I think we did.”
Hollyn laughed at her boldness. “You name your future children on first dates, don’t you?”

One of my favorite things about Roni Loren books is the friendships. I loved Hollyn’s friendship with Andi, from its hilariously rocky start to meeting up for drinks and girl talk. I also liked Jasper’s old friend Fitz, though I did find his willingness to find funding for Jasper’s idea a bit too pat. I loved Monique, part of Jasper’s improv group, who’s not afraid who hold Jasper accountable and who also gives some incredibly wise advice to Hollyn just when she needs it. I hope she eventually gets her own book!

Overall, I adored this book, and I can’t wait for Andi’s book, which is next!