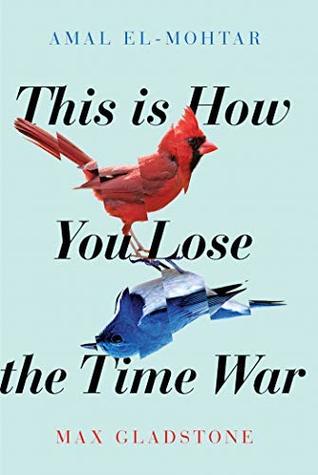 I was excited when I saw this in one of my local little free libraries, because I remembered seeing several very positive reviews on CBR. Sometimes, though, things just don’t work out. On paper, it sounded great: love story between enemies; strong women kicking ass in battle; time travel triggering alternate histories. I wanted to love this. The execution just didn’t work for me.

Red and Blue are agents in opposite sides of a war. Red’s side, “the Agency,” is a technotopia, and Blue’s side, Garden, is an organic entity where everything and everyone is connected through a collective consciousness (I think). The war spans numerous time periods, with the agents traveling through time and altering histories in favor of their respective “worlds.” At the beginning of the novel Red, fresh from a battlefield victory, finds a letter from Blue, a little barb that begins, “Look on my works ye mighty and despair.” Red responds, and soon the pair are exchanging taunts that evolve into expressions of friendship and eventually love. It’s impossible for them to continue their relationship without betraying their society. Eventually they are faced with the question: Which is more important, loyalty to their people, or their love for each other?

While not a completely epistolary novel, the majority of book comprises the letters between Red and Blue, and I think the book suffers from that limitation. My biggest problem with it is that I wanted more world-building, and that obviously can’t happen in letters between two characters who already know everything they need to know about the war and their respective worlds. Why are the Agency and Garden fighting? How does the time travel work? We get a little bit of Blue’s history, but not enough to satisfy my interest. The myriad ways they exchange “letters” is intriguing but never explained. At one point, Blue writes, “You’ll ask, But how are you able to send me letters in the contents of birds’ stomachs?” Yes, Blue, yes! I also have that question! But she just says, “Think of birds as a comms channel I can open and close seasonally.” Nope, sorry, not enough for me.

Obviously this book is about the romance and not about the world, but that also felt flat. Romance is not my genre, so when I read things like, “Maybe I overstep your bounds. And to be honest, love confuses me. I’ve never felt it before this,” I just think, “meh.” Is that good romance? I found it trite.

Ultimately, this is not the book I was hoping to read. I can understand why people like it, but I’m also surprised it’s won as many awards as it has, since enemies falling in love is not new concept. Same-sex, time-traveling enemies might be new, but that just felt like window-dressing to me.