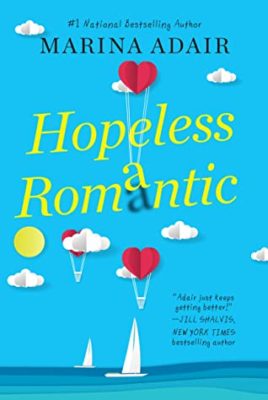 I liked both Levi and Beckett from the last book, so I was very much looking forward to seeing them together. Unfortunately, it didn’t work out as well as I’d hoped. In order to talk about why the book didn’t work for me, there’s a lot of spoilers for the book below.

“The only way to keep her world spinning was to maintain control of all the moving pieces. One wrong move, and it was checkmate.”

Beckett and Levi have a lot of misconceptions about each other. Beckett thinks Levi is a responsibility-averse playboy, while Levi thinks Beckett is a flake. They both have plenty of reasons for that, but unfortunately a lot of those happened before the book started, namely at Annie and Emmit’s engagement party and a mixup with a retirement party where Beckett left Levi holding the bag on 200 mini crab cakes.

“I don’t need to be taken care of, Levi,” she said.
“I like that about you.” He wrapped his arms around her. “But needing and wanting are two different things. And there are times I’ll want to take care of the woman I’m with. Not because I think she’s weak, but because I want to make her happy.”

The book starts with a funny “rooster walks into a bar” gag – Beckett trains emotional support animals, in this case a rooster – but emotional support animals don’t have the same protections as an actual service animal, and asking for papers for a service animal is an ADA violation. So off the bat I was annoyed at her for bringing a random animal into the restaurant (where it proceeds to poop on the bar) and annoyed at Levi for not bothering to do a simple google search on how to ask if an animal is a service animal (literally, “is that a service animal?”). While Beckett grew on me, Levi was a harder sell. Beckett’s obviously overworked and overextended trying to both start a business and take care of her family. Beckett’s been taking care of her family since her mom walked out when she was sixteen. Both her father and brother have autism, and it seems like all of the various family responsibilities fall solely on her. She’s pulled in so many directions that she feels like she’s not handling any of them well, and she’s right. It takes Levi a while to realize that, and once he does, for the most part he’s remarkably supportive (he understands what it’s like to step up and raise a kid not your own), though I did roll my eyes at his solution for her being swamped by both business and wedding planning is to… hire her to solve his staffing issues. Their relationship felt like it moved too quickly, especially given both of their prejudices against each other. And given how busy they are, I never felt like they really had time to let their relationship develop, especially with the deadline of Levi’s sailing trip.

“He’d been so busy helping his mom, and his niece, and even his brother-in-law deal with Michelle’s loss, there hadn’t been a lot of room for Levi to deal.”

There was so much going on that it never felt like enough space was given to each issue. Levi’s still dealing with the grief from his dad’s passing (one of the reasons he wants to go on the sailing trip is it was the big trip he was supposed to take with his dad), his mom’s boundary-stomping clinginess, staffing issues at the restaurant, giving Paisley the “cool uncle” sounding board for all the normal teenage drama plus the death of her mom, oh, and trying to deal with his own grief over his sister’s death. And that’s not even counting Beckett’s issues!

And the elephant in the room: the autism rep. One of my kids has autism so this is definitely one of my hot buttons, and the more I read the more uncomfortable I got. I’m not on the spectrum myself, and I will repeat the old saw that “if you’re met one person with autism, you’re met… one person with autism.” But since Beckett’s POV is of someone who’s supposedly spent most of her life taking care of someone on the spectrum, I feel like I have at least a little standing to critique it.

Look, I’m the first person to admit that being the primary caregiver to someone who’s not neurotypical can be challenging, demoralizing and exhausting, but literally that was all I got out of Beckett’s experience with her family. It was all the bad stuff – having to avoid certain food types for medical reasons or texture issues, navigating sensory issues, knowing the best way to de-escalate a meltdown. People in the book kept saying that Beckett loved her family, but all I saw was the caregiving, no love, and certainly none of the emphasis on the ways autistic folks express love or the enjoyable bits. Even the scene that I thought approached this the most – the fornication scene – felt more like the humor was at Thomas’ expense because of how differently he approached things. And all that’s not counting the differences between their fictional homelife and what I’ve seen myself. My kid has different challenges than Thomas, but from my understanding, at least where I live, they’d qualify for respite services – basically, a trained helper who comes in to spend time with Thomas so that Beckett would actually get an occasional break. That’s also not counting whatever services he’d get through school, which would probably include the daily living training, like grocery shopping, that she was trying to do. And for someone who has a history of elopement, there’s a lot of best practices (and resources from the state/insurance/private autism support groups) from specialized window and door alarms to wearable GPS tags.

As for other cons, I totally didn’t buy her dad’s sudden about-face at the end, and I was left feeling like too many threads were hanging. What happened with Annie and Emmit’s wedding? Did Levi finally resolve the employment issues at the restaurant? Did he set some better boundaries with his mom? Did he go on the sailing trip? What happened with Paisley’s ski trip? Maybe these are all meant to be covered in the next book, but it made the HEA a little unsatisfactory for me.

Overall, for a lot of reasons, the book just didn’t work for me.