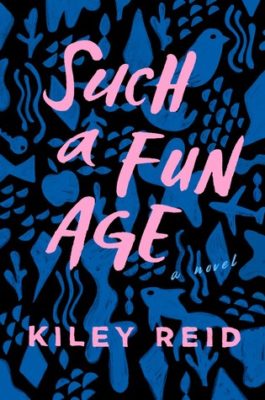 This book was a wonderful surprise. I don’t know why I thought this was going to be a YA novel before I picked it up. It might have to do with the fact that the main character is a babysitter but if anyone is under the same misconception as me, be aware this is not YA. It is actually one of the most interesting fiction books I’ve ever read which discuss the different ways racism manifests in people who consider themselves allies.

Such a Fun Age tells us the story of Emira, a 25-year-old babysitter who is out with friends when she gets a call from her boss if she can come and take her 2-year-old out of the house for an hour or so while the parents deal with the police and a small emergency in their home. Emira is a little lost, but that is okay. She needs the money so she and a friend go to the Chamberlain’s straight from the club in their best night out outfits.

Emira and her friend Zara take little Briar to the nearby grocery store where they are smelling nuts and dancing a little and just killing a little time, until someone decides to call security because clearly the only explanation for this situation is clearly that Emira has kidnapped the toddler. Despite her fear, Emira manages to keep her cool and protect Briar until the girl’s father appears and she runs. But not before a guy manages to get it all on film, though he agrees to send it to her and not post it anywhere.

Emira expects everything should get back to normal. She is understandably shaken by the situation, but she is more annoyed that she knows this was not an exception. This is the kind of risk black people take when going about their everyday lives and that angers her more than her personal incident. However, every white person involved, or who heard it second-hand, goes completely insane from that point on. This is especially true of Alix Chamberlain, Briar’s mother, and Kelley Copeland, the guy who was present in the grocery store and got it all on film.

Between them, we see reflected back at us all kinds of racial bias, and decidedly the worst ways to go around dealing with these situations. And also life in general, if I’m being honest about it.

This was a really good book. I read it in less than 24 hours, I really couldn’t put it down.