> FAQ Home
> Genre: Children's Books > Texas Tea and other places in the world

While only having read two of books in the Magical History Tour series, I am enjoying them. First, they seem to hit on subjects not always covered (though pyramids are a popular subject, I am assuming the Crusades, oil, and the Great Wall of China less so. But I am looking forward to The Plague edition) and second, they are good books to be introduced to the subject. They allow the reader to realize there is (unlike oil) more under the surface.

However, Magical History Tour V03: Hidden Oil seems to be missing “something.” Perhaps I was looking for a little more detailed information about the process of oil being made, or “something that I am unable to put my finger on”, but I was not jumping up and down. Still, I enjoyed the presentation Fabrice Erre does with giving us the history of finding oil around the world, the money trail, and a bit of the consumption within the world of oil. We of course, see the mover and shakers (from Rockefeller to the Arab Nations) and the politics behind it all. The end deals with information on conservation to a point. I would have liked to have seen more about that mixed into the main text, but glad to see it is there. The book shows not only the “now” impact, but how that impact will have on the future. 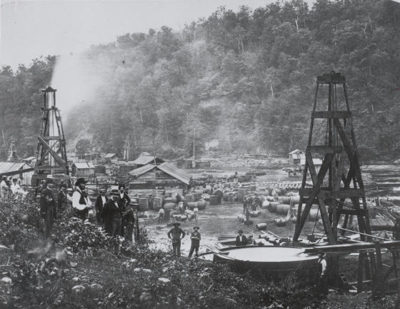 This is down with the aide of two characters Annie and Nico. They are two kids (possibly brother and sister) who travel around time pointing out the subjects spoken about. They are “there” but unseen to the past. They are simple done by Sylvain Savoia’s illustrations. The colors are not muted, but not overwhelming and the details fit on the page but allow the subject to come to life without being crowded.

Translated from the French, sometimes the flow is a little off to the text, but overall, this will not bother the reader aged 8 to 10. Young can enjoy listening or if a strong reader, do it solo. Oil is due out later this year along with Crusades, Albert Einstein, and the plague. The pyramids and The Great Wall of China are already published.