> FAQ Home
> Genre: Fiction > “The truth is we don’t know what we don’t know. We don’t even know the questions we need to ask in order to find out, but when we learn one tiny little thing, a dim light comes on in a dark hallway, and suddenly a new question appears.” 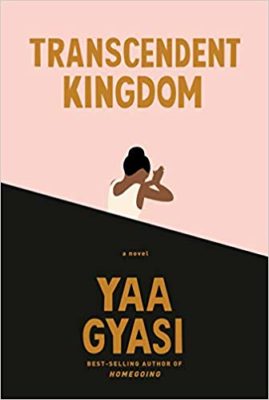 We all lost our collective minds over Yaa Gyasi’s debut novel, Homegoing, which was a century-spanning epic about race and family, so the pressure was on for her sophomore effort. I think she’s made the smart choice to try for something completely different. Where Homegoing had buckets of characters, narrated in the third person, and a new setting and time period every fifty or so pages, Transcendent Kingdom is a smaller, more intimate portrait of one woman thinking about her life, and thinking about her future.

Gifty tells us her story in the first person, and she is pretty much the opposite of an unreliable narrator. The book is written in a confessional style, as Gifty meditates on upon the intersection of faith and science in her life, and remembers her family history, before and after the death of her sixteen year old brother, Nana, who was addicted to opioids.

Gifty is a graduate student studying reward seeking behavior in mice, as she works towards understanding and ending the disease of addiction that took her brother’s life, all the while her severely depressed mother is staying with her and won’t leave her bed. All of this sounds depressing, but while you’re reading it, this isn’t a depressing book. Gifty is a thoughtful narrator who is ultimately hopeful about the future, despite all of the horrible things she has lived through.

All that to say, with practically any other author, I wouldn’t have been interested in this book. Very glad I picked it up, as Gyasi’s skill with words holds true, even though the story she’s telling is so different (though there are some common themes surrounding the Ghanaian immigrant experience). Highly recommended.