> FAQ Home
> Genre: Fantasy > He is full of roots, while she has only branches. 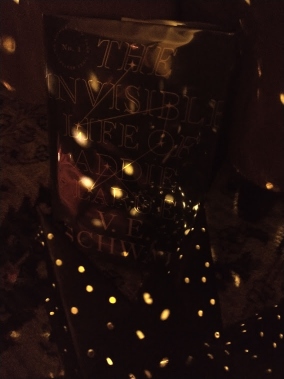 This author is definitely on my “put in a library request as soon as a new title shows up” list. Schwab’s Shades of Magic series is phenomenal and while I didn’t enjoy them as much, the Monsters of Verity YA series was also very good. I entered her literary treasure trove with the explosion of A Darker Shade of Magic (thanks to many, many CBR reviews way back when) and have been holding off on reading her previous books because it’s always sad when you run out of a good author’s work.

So, in a year unfocused reading, I was glad to see that I had a good candidate for falling down the reading rabbit hole with a book that would probably capture even my anxious brain.

In early 1700’s rural France, Adeline LaRue is a curious soul trapped in a world that only has use for the practicalities of village life. Well after her friends have been married off, Adeline is cornered into marrying a widower with young children. Terrified of the life she will be forced to lead, she escapes into the woods; pleading to the trees, to the old gods, to anyone who will listen.

In the darkness, someone is listening and the bargain that Adeline makes, to live a life on her own terms forever, is granted with a steep price. Isn’t it always? Adeline can live as long as she wishes but no one will remember her. Centuries spent as a witness to the world with little trace of her participation within it. The darkness waits to take her soul when she is tired of living her invisible life, but it becomes a battle of wills. The game that Adeline plays with the only person who remembers her.

I am a notorious sucker for book series especially if I am invested in the characters and not ready to say goodbye. Build a detailed and interesting world, inhabit it with people whose character arcs are worth following to the end and I am hooked. Epics are my thing and I sort of wish that is what Schwab had done with Addie and her story. The culmination of Addie’s story came too soon for me. While Schwab gives a considerable amount of flashback, 300 years of living is a lot to cover and the most pivotal plot point of the story (which I don’t want to spoil) wasn’t completely believable to me.

In some ways it was two separate stories that weren’t ready to come together yet: Adeline finding her way through the world and Addie’s realization of who she is and who she truly loves. I liked the book a lot but would have been more satisified if it had earned its ending.