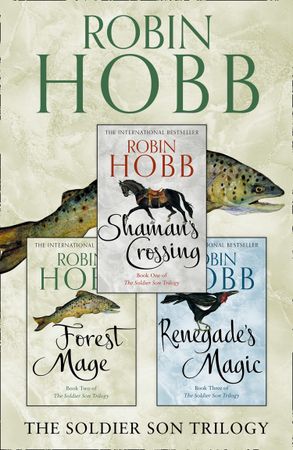 Robin Hobb writes pain so well.  I remember reading Shaman’s Crossing and Forest Mage when they first came out and choosing not to buy Renegade’s Magic because I couldn’t face Nevarre’s life getting any worse.  This time around I stayed the course.

Nevarre is the second son of a retired soldier who has been elevated to the nobility with a grant of land far from the capital.  This determines Nevarre’s future role in the rigid society of Gernia.  He will attend the King’s Cavalla Academy,  marry a young woman of comparable social rank of his father’s choosing, serve with honour as a cavalla officer, and retire to support his older noble brother to build up the family estate and its associated frontier town.

Nevarre has no quarrel with this destiny.  His father may be harsh and cold, but he is proud and excited to be heading to the Academy and has high hopes of a match with his sister Yaril’s pretty friend Carsina.  But his life is set on a different course when his father sends him out on the plains with Dewara, a plainsman of the conquered Kidona, to learn things his father couldn’t teach him.  This training culminates in a vision quest that links Nevarre to a shaman he calls Tree Woman who wants to use Nevarre against his people who are invading the lands and desecrating the culture of her people, the Specks.

Shaman’s Crossing sets the scene of the Gernian social order and takes us with Nevarre to the capital and the Academy.  Here he encounters bullying and discrimination as the son of an upstart new noble, and makes the friends and enemies that will be key supporting characters in his story.  His best friend Spink comes from an impoverished backwater barely noble family, and his brilliance probably won’t be enough to overcome these disadvantages.  His cousin Epiny, the spoiled headstrong daughter of his old noble uncle, claims an affinity with the spirit world that Nevarre initially dismisses as an affectation to help her mother win the favour of the Queen.  Young Caulder Stiet, son of the Academy’s commander is entangled in the bullying of the new nobles’ son and his family’s ambitions.

Nevarre shines at the Academy, until his connection with Tree Woman blows up his world and sets him on the path that he will be forced to take as the trilogy continues and takes us to the troubled military outpost at the frontline of the conflict between Gernia and the Specks, and then into the forest and Speck society.  Nevarre’s encounter with Tree Woman has made him a first unwitting and then unwilling tool of the Specks’ magic.  The more he fights this destiny and tries to salvage the wreck of the life he hoped for, the harder the magic pushes him.  He tries so hard to be the man he was raised to be, as the magic twists his body and cuts him adrift from his family, his ambitions, his loyalties and his honour.