> FAQ Home
> Genre: Fiction > A late 80s-romance novel helps me cross off another square (double bingo)
2.5 stars
#CBR12 Bingo: Shelfie
Official book description:
Catherine Pelliston simply would not abide by her father’s wishes and marry the slovenly Lord Browdie. But her escape through the streets of London only seemed to lead her from bad to worse. First, she was robbed. And then, her supposed “rescue” by a kindly old woman stranded Catherine in a bordello — where the handsome Viscount Rand was intent on sampling her wares! A dire predicament indeed-especially when the dashing aristocrat decided to assume full responsibility for the ravishing runaway by taking her, quite against her will, into his home. But little did Catherine know that her struggle to preserve her virtue had inflamed the debauched gadabout’s heart … and might well net her a husband worth desiring!
This is one of Loretta Chase’s early romances, originally published in 1988, and later re-issued in e-book format in 2012. One of her most famous novels, Lord of Scoundrels, didn’t come out until 1995. This book is both shorter, and a lot less sophisticated than her later, more famous works. It’s also not terribly memorable. I finished this book in mid-August and even now, reading through the blurb, I can only barely remember plot specifics.
Chase’s early writing really doesn’t have the same wit and spark as many of her later novels. There are no classic, bad-ass heroines like Jessica Trent, charming rogues like Rupert Carsington, or enigmatic spies like the Comte D’Esmond. Catherine is pretty painfully naive and very lucky that the nobleman she appeals to doesn’t in fact ravish her, but rather takes pity on her, rescues her, and promptly deposits her with his very respectable sister, who can act as her chaperone. See, I remember that much. I also recall that the sister’s husband has a much better grasp of the various notable families of the ton, and therefore knows immediately who Catherine actually is and which family she’s run away from, and happily aids his wife’s matchmaking attempt for the rest of the book. I remember there was a potential of scandal when someone (not entirely sure who now), possibly Catherine’s not-quite-fiancee, figured out that she had spent some time in a brothel – but it all comes right in the end – natch, this is a romance novel.
Checking my records, I actually bought this e-book back in 2012 (when I was still discovering Ms. Chase’s back catalogue) and it’s been sitting on my shelf ever since. I could have used it for the White Whale square, but it’s one of those books that I’ve had for so long, I’d more or less forgotten about it when I was planning my Bingo Card. It did, however, fit in my Alphabet Soup reading challenge for V, and once I looked it up on LibraryThing, I was surprised at how long it had been on my digital shelves, unread. It’s not exactly easy to take a photo of a digital book, but here is a screenshot of the LibraryThing shelf – which is the best I can do to fulfil the demands of the Shelfie square. 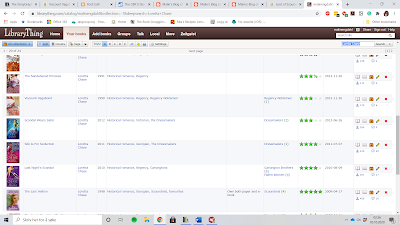 In conclusion, if you’re not a true die-hard completist about Loretta Chase, this is a book that is entirely skippable. If it didn’t fit into a number of my reading challenges (I can cross off a bingo square, it fits in my historical fiction challenge, in my two TBR challenges, as well as the alphabet challenge) and I already owned it, I doubt I would have ever read it.
Judging a book by its cover: This is the rather generic cover given to the new digital edition when I got the book. The original 80s cover is a true marvel of pastels, a very brooding hero and a swooning heroine in his embrace (but wearing historically appropriate outfits, which is more than one can say for a large majority of more modern historical romances published today – Lisa Kleypas’ Ravenel series and Tessa Dare’s Girl Meets Duke, I am especially thinking about you right now.
Crossposted on my blog.
Bingo #8: Gateway (Murderbot novellas), Orange (Call Down the Hawk), Nostalgia (Angus, Thongs and Full-Frontal Snogging), Pandemic (Beach Read), Shelfie (this)
Bingo #9: Music (Born to Run), Shelfie (this), Book Club (Places in the Darkness), Adaptation (Me and Earl and the Dying Girl), Violet (The Disasters)