> FAQ Home
> Genre: Fiction > “No matter how much you give to this heart, it will never be enough.” 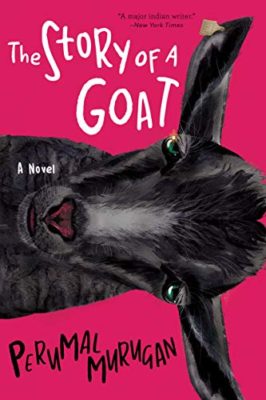 The Story of a Goat is a short novel by acclaimed Indian writer Perumal Murugan. Set amongst the poor farmers and herders of a small village, it provides the points of view of both an older couple and a small black goat named Poonachi as they struggle with the elements, bureaucracy, and the luck that fate throws at them. Like Orwell’s Animal Farm, The Story of a Goat is a commentary on politics (in this case, contemporary India) as well as society as a whole and the treatment of women in particular. This is no children’s story, as the harsh realities of life and death are described in brutal detail.

The story opens with the “Old Man,” one of the main characters, out in the pasture with his few goats as the sun is setting and he is preparing to return home to his wife, the “Old Woman.” It is interesting to note that the humans in this story do not have names but the goats do. The Old Man is thinking how nice it would be to have another goat in his small flock when in the distance he sees a large, giant-like man approaching. This enormous stranger is carrying a very small, black goat kid, a female, which he offers to the Old Man for nothing. The Old Man is suspicious and wonders why the stranger doesn’t sell the animal, but the stranger tells him that this goat is special, the seventh kid of a miraculously large litter, and that he must give it to a worthy person; money is not important. And so the Old Man’s wish comes true. He now has another kid, a female from a miraculous line. Yet almost immediately troubles arise. As he carries the kid home in a basket on his head, an eagle attacks and tries to steal it. His wife, the Old Woman, shares his delight in their good luck and names the little goat Poonachi. The Old Woman adores the kid and gives it special care as it seems so fragile, but the nannies in their herd refuse to suckle her. As a result, the Old Woman must go to great pains to feed Poonachi and help her grow. Troubles pile up as Poonachi is attacked by a wild cat and then abused by the local bureaucrat, who finds her rare jet-black color suspicious and who tags her roughly, leading to injury. Somehow, Poonachi survives these calamities, although she always seems to be living on the fringe of the goat community and is constantly at risk of harm. The Old Woman is her special protector.

Poonachi’s life changes dramatically after the Old Man and Old Woman take her and the other goats on a pilgrimage to visit their daughter and celebrate the festival of a deity. It is on this journey that Poonachi is briefly lost and must get through a night alone. The experience proves to be both frightening and exhilarating, and it forces Poonachi to consider the advantages of independence versus community:

“Living amidst her own community would give her lasting security. Everything was available in the forest, except her own herd. Could she ever live alone?”

A further complication presents itself at the daughter’s home. It is there that Poonachi meets Poovan, the kind goat who wins her heart. When the festival ends and the Old Man and Old Woman gather up their goats to leave, Poonachi and Poovan are both distraught, and for the first time Poonachi is shackled (her forelegs tied to her neck to keep her head down and hobble her movement). This rope will never be removed from Poonachi’s neck and her dislike of the Old Woman begins here.

Not long after the pilgrimage, Poonachi experiences puberty and her first mating. Although there has been little rain, the Old Woman makes sure to keep Poonachi well fed through her pregnancy, knowing that Poonachi will, like her own mother, produce a litter of seven kids. The birth of seven kids to one goat is considered miraculous and it draws a crowd when villagers hear of it. Everyone wants to touch Poonachi and her kids, and everyone wants to have one of her kids. The local authorities are suspicious, of course, since seven kids is outside the norm but then they decide that this unusual event can be used to the advantage of the state and offer support. Poonachi, meanwhile, is exhausted from trying to feed seven kids, then devastated when they are sold away from her.

From here, the Old Man and Old Woman seem to teeter back and forth between thinking Poonachi is a miracle to considering her a burden. Poonachi sees that their feelings for her change with the weather, almost literally, and that her own feelings and needs mean nothing to them. Those whom she loves are ripped away from her, and often Poonachi witnesses the violence visited upon them. As drought ravages the land, the scales tip more into the “burden” side of the equation, and Poonachi’s “miraculous” status diminishes.

“What sense did it make for ordinary folk to own a miracle? Protecting and preserving it was beyond their capabilities…. The problems faced by women in particular were endless.”

The ending to the story is sad but unsurprising. In the end, a woman, or any outsider, must be able to rely on their community for support but the community may not see any reason to offer special protection to those who are vulnerable. The Translator’s Note at the end of the novel offers excellent insight into the themes of the novel as well as an explanation for the final scene in the story. If you are into political allegory or are looking for an “Uncannon” reading selection, I recommend The Story of a Goat.