> FAQ Home
> Genre: Fantasy > My childhood #Gateway into the genre I love most 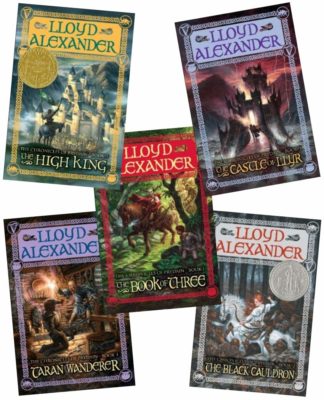 I have loved fantasy since I can remember. I don’t actually remember when I started reading it, but I credit it to my deep and abiding love for Lloyd Alexander’s Prydain Chronicles. Although I have no vivid memories of the first time I read it (aside from one shocking moment in The Black Cauldron), I reread the series regularly throughout my childhood and my teenage years. I loved them every time. Aside from The Book of Three, which I read to my much younger sister a few years ago, I haven’t picked them up again as an adult. This spring, a friend was telling me how much he enjoyed the audiobooks, so I picked them up and listened to them while I was alone in my house doing puzzles (this might even have been just pre-pandemic…).

Thankfully, I loved them just as much as ever.

For those who never had the fortune to encounter these books, either as children or adults, they follow Taran, an Assistant Pig-Keeper who wants to be a hero. Starting with The Book of Three, Taran is sucked into a quest when his land of Prydain is threatened by Arawn, the shadowy evil lord, and his henchmen. Along the way, Taran makes new friends: Gwyddion, the true hero prince of Prydain (even if he doesn’t dress like one); Eilonwy, the talkative princess-enchantress of a lost kingdom; Fflewddur Fflam, a hapless bard; Doli, one of the Fair Folk who can turn invisible; and of course, Gurgi, a loyal if cowardly creature obssessed with food.

The Black Cauldron is more focused on the threat from Arawn, who uses the eponymous Black Cauldron to create undying zombie warriors from the dead. Every time the combined forces of Prydain try to fight him, he only grows stronger. So they resolve to steal the Cauldron. It is a marvellous twist that the book seems initially to be about an all-around assault on Arawn, only for them to discover that the Cauldron is already missing.

The Castle of Llyr is Eilonwy’s moment in the sun, when she is sent to a neighboring kingdom to train as a lady (to her displeasure) and also possibly to wed the foolish Prince Rhun. (Side note: I adore Rhun). Taran is dismayed, but even more when Eilonwy is kidnapped by the evil enchantress Achren from the first book. I’ve always liked a side of romance with my fantasy, and I think Taran and Eilonwy are to blame.

Taran Wanderer was, as a child, my least favourite of the quintet. Taran journeys around Prydain, trying to discover his parentage so he would be worthy of marrying Princess Eilonwy. He encounters many different people and learns of their plight, and also tries his hand at various crafts. I can understand why childhood me was bored: it doesn’t have a tight plot like the others, and I missed Taran’s steadfast companions. But the themes of trying to prove yourself worthy and finding your place in the world hold so much more meaning as an adult. I listened to it with a lump in my throat and prickling eyes almost throughout.

Another thing I appreciated more as an adult during this reread of the series was Taran himself. When you’re a child, the bright, humorous characters of Fflewddur and Eilonwy are more appealing than Taran, who constantly seems to do the wrong thing. But as an adult, I loved that aspect to Taran. As a literary hero, Taran is a masterclass in character study, someone innately flawed and yet someone you can root for. He is brave but foolhardy; ambitious yet self-conscious; quick to anger but also to admit when he’s wrong. He loves and hates equally passionately, but is also able to realize when his grudges are unfounded.

And Alexander constantly forces Taran into situations that test not his bravery, but his kindness. His feud with Prince Ellidyr drives much of the plot of The Black Cauldron, but it is Taran who constantly swallows his pride and offers an olive branch. His relationship with the man he believes is his father in Taran Wanderer is bittersweet and poignant. He and Eilonwy may argue (especially when he tries to treat her as someone who must be protected at all costs instead of as an equal), but he always accepts her perspective in the end.

Unfortunately, the audiobooks seem to have been temporarily taken off the European market so I haven’t been able to listen to The High King, which may be the one I remember least from my childhood (aside from That One Scene with the harp that will stick in my mind forever). I will keep an eye for it to come back on Scribd.