#CBR12 Bingo: Happy (I never thought that Sandman could be adapted into an audio story, so this made me very happy indeed)

When The Sandman, also known as Lord Morpheus – the immortal king of dreams, stories and the imagination – is pulled from his realm and imprisoned on Earth by a nefarious cult, he languishes for decades before finally escaping. Once free, he must retrieve the three “tools” that will restore his power and help him to rebuild his dominion, which has deteriorated in his absence. As the multi-threaded story unspools, The Sandman descends into Hell to confront Lucifer, chases rogue nightmares who have escaped his realm, and crosses paths with an array of characters from DC comic books, ancient myths, and real-world history, including: Inmates of Gotham City’s Arkham Asylum, Doctor Destiny, the muse Calliope, the three Fates, William Shakespeare , and many more.

In July 1998, my life changed forever. In those days, I still lived in a suburb of Oslo and didn’t necessarily visit the centre of the city all that often. When I did, I always took a trip to Avalon, the dedicated fantasy/sci-fi/all things nerd book shop there (the book shop sadly closed long ago now). On a display table near the front of the shop was Fables and Reflections, by no means the first volume in the long-running Sandman series, but an excellent introduction. I think Neil Gaiman had recently visited Oslo for the first time, and the shop was promoting his most famous work. I had never read any graphic novels before but was drawn by the description of the series. I bought the book, started reading it on the bus on the way home, and my mind was blown. I had never read anything like it before, and I was utterly hooked on the stories of dreams and nightmares, the family dramas with references to all manner of mythology, classical literature, comic books, and the like.

This was a time when Norwegian libraries were not particularly well-stocked with fantasy of any kind, and certainly not English-language comic books and graphic novels (I’m happy to say that that’s changed massively over the last 20 years – one of the public library branches in Oslo is now dedicated entirely to comics and graphic novels in different languages. Hence, I had to buy each volume before I could read the full story. My records show that it took me about a year to get all ten volumes of trade paperbacks, some of which I’ve now had signed by Neil Gaiman himself.

Funny story, one of them isn’t actually signed to Malin, because my dear friend Ben was a bit of an idiot back when he took my copy of Preludes and Nocturnes to a signing in Newcastle. This was back before I really knew him, and he was still just my then-boyfriend, now-husband Mark’s school friend. See, Ben and another of Mark’s school friends, Ruth, had initially joked that his Norwegian girlfriend’s name was Helga. By the time Ben was taking one of my precious trade paperbacks to Newcastle to get it signed as a favour, he’d met me several times, and knew my name was Malin. But when he got to the front of the signing line, and Mr. Gaiman asked him who to sign the book to, Ben (lovable moron) blurted out Helga, and only after he’d left the shop remembered that it was not, in fact, my actual name. This is also why I have a signed copy of Anansi Boys, where Neil Gaiman apologizes to me for getting my name wrong. 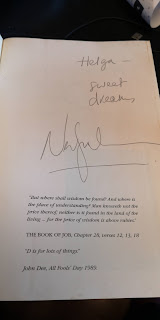 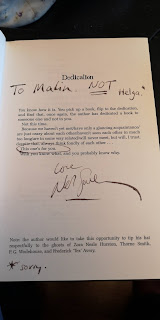 Anyway, the long and rambling introduction to this review is included to show just how long Sandman has been part of my life, and how much it means to me. It was my introduction to graphic novels and the writings of Neil Gaiman. It showed me a whole new way of storytelling. I never thought it could be adapted well in a million years (I’m still skeptical about the Netflix series). I’ve rarely been so happy to tell you I was wrong. This was an excellent adaptation, and I think I liked parts of it a lot more than the actual original comics issues (while a lot of the artists and artwork used in the series was state of the art back in the 1990s, it’s sometimes a bit “grimy-looking” now – unless you have the stunning Absolute Sandman volumes, that cost a small fortune).
Full review on my blog.
Bingo #7: UnCannon (Bitterblue), Nostalgia (Angus, Thongs and Full-Frontal Snogging), Yellow (Take a Hint, Dani Brown), Happy (this), Repeat (The Last Wish)