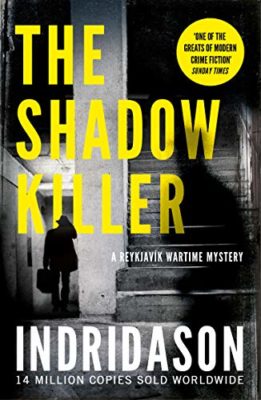 In 1941, a travelling salesman is found murdered and with a swastika painted on his forehead in a flat in Reykjavík. The local detective Flóvent is joined in his investigation by Thorson, a member of the military police, when the murder weapon is identified as the gun of an American soldier.

The real protagonist of this book, however, are not the two investigators, but wartime Iceland, with American and British soldiers invading the small country in great numbers and changing pretty much everything for the locals who were decidedly ambivalent in their feelings towards the foreign troops. Especially the fact that young Icelandic women mingled with the soldiers, which was referred to as “the Situation”, was a point of contention. Indriðason does a very good job of bringing this period to life and creating a fittingly somber and tense atmosphere, and he provides a lot of information on the country’s overall state at that time which was something that I really enjoyed.

The downside of this is that the characters remain mostly elusive. There is at least some background information on Thorson, and some scenes in which we get a little insight into his private life, but Flóvent remains a complete mystery. Then again, I only noticed that this is actually the second book in the series after I had finished it, because this is actually a prequel to the first book. But even if there is some more information on Flóvent in the first one, I feel that he should have been granted a least a little more attention as one of the two investigators. The plot is engaging enough and connected to the political situation at the time which I liked, as well as the ending, which doesn’t provide any easy answers, but is fitting for a book in such a dark period of history. I am sure that Indriðason wanted to deviate from the conventions of crime fiction anyway because throughout the books it appears that he is more interested in the overall situation than in the main plot. Whether this is seen as a good thing will most likely depend on the reader, as on one hand, it makes the scope of the book more expansive, but on the other makes it lose focus at times.

I really love Indriðason’s Detective Erlendur series which, in my eyes, is one of the best crime fiction series around, so of course this new series has to be compared to it, even if it is probably unfair to do it. Sadly, it does not quite measure up, and mostly because of the characterisation. I nonetheless recommend it to fans of crime fiction, especially historical and Nordic noir one, because Indriðason still knows how to write captivating stories, and how to bring his country and its history to life in his readers’ minds. I will definitely go back to this series and read the first book.