> FAQ Home
> Genre: Fantasy > It was comforting to return to an established world: cbr12bingo “Yellow” 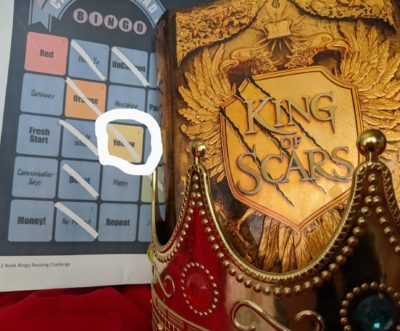 I love this gorgeous cover, from the golden yellow to the intricate details referencing elements of the story.  I’ve been looking forward to reading this, so I was delighted that it fits the yellow square!  Three colors now crossed off on my bingo card.

After going through three long books, two of which were challenging and thought provoking, requiring close attention and processing of what I was reading, the other a chonker of an epic fantasy, I was ready to return to something familiar.  This made the selection of the next book easy as I was excited to dive back into the Grishaverse.  I’m glad I did because depression has hit hard and it was a comfort to be back in an established setting and familiar characters.

Set three years after the events of the “Shadow and Bone” trilogy and shortly after the happenings in the “Six of Crows” duology, King of Scars is the most recent addition to Leigh Bardugo’s Grishaverse.  While prior knowledge of “Shadow and Bone” isn’t necessary to enjoy “Six of Crows”, reading both series is necessary for King of Scars, first book in this new duology.

I relished being back in Ravka and finding out how Nina, Zoya, and Nikolai moved forward from previous events.  What is happening now is a natural extension to what happened before.  Nina’s grief is palpable as she struggles to let Mattias go and live as he would want her to. In addition, Nina struggles with her new Grisha abilities.  Returning to Fjerda, she is on a mission to rescue Grisha who have been living in hiding.  For to be discovered is to be tried and killed for witchcraft.

Nikolai and Zoya are desperately trying to keep Ravka afloat.  Part of doing so requiring hiding the fact that the dark creature within Nikolai has been taking control.  Turning into a flying monster is not helpful at a time when Ravka is besieged nearly on all sides.  Surrounded by the Fjerdans and Shu Han threatening its border, indebted to the Kerch, and not wanting to tick off the Novyi Zem,  Ravka must walk a fine line.  Zoya and Nikolai carefully dance around the closeness of their relationship.  They enjoy each other’s companionship, and the team they have become working side by side, but isolate any feelings as Nikolai must secure the throne through marriage and an heir.  Throughout, Zoya examines her desire for power, where it came from and how it has affected the course of her life.

Along with the political powers that have been making moves against Ravka, a new cult of worship has come demanding that the Darkling be raised to the status of saint hood.  After the miracles of Sankta Alina, the Ravkans are even more deeply into the worship of their saints.  A religion that Nikolai and Zoya have long scoffed at because the saints were just Grisha.  But strange miracles do seem to be happening and it begins them questioning the powers that are at play.

I was captivated the entire time reading.  At points things would jump out at me, mostly social commentary and how it reflects in our world.  Unfortunately, I did not do my usual tactic of putting small sticky notes in the book and depression washed away anything insightful that I had found.  Bardugo also worked some cute things in too, one of which did stick in my memory.  I giggled when a couple were having a private dinner, where they couldn’t identify all the dishes but they agreed ‘the grey stuff was delicious’.  It instantly called back to the line in the Disney animated “Beauty and the Beast” song, ‘Be Our Guest’, “Try the grey stuff it’s delicious, don’t believe me?  Ask the dishes!”.