> FAQ Home
> Genre: Fiction > One of the few times I will say to watch the movie first. 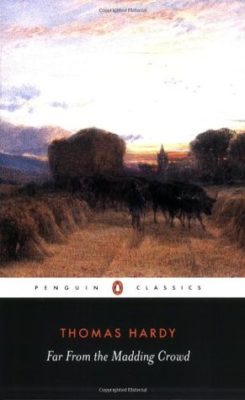 I probably chose the wrong time to read this one, as so many of my friends like it quite a bit, even ones who don’t like Thomas Hardy as a writer. But it nicely filled a challenge for Read Harder, and because it’s been on my TBR for over a decade, and it was available on SCRIBD, I did it. And I didn’t not like it, I just found it hard to finish, and it never really caught my attention. I missed soooo much while reading because my brain just always wanted to be somewhere else. This is where I confess that I had to do research on the plot and themes and the historical context afterwards to see what exactly the point of it all was. (This was actually really helpful.)

Far From the Madding Crowd follows Gabriel Oak, one-time farmer, now down on his luck shepherd, over the years of his personal and professional relationship with Bathsheba Everdene, a free spirited woman who inherits her uncle’s farm. The novel is structured around Bathsheba’s relationship with the three men who wish to marry her: Gabriel (who is turned down by her at the beginning of the novel as she tells him she’s too independent to marry), Mr. Boldwood (a wealthy but socially awkward bachelor who she sends a joke Valentine to that causes him to notice her and fall into a rather unhealthy obsessive love with her), and Sergeant Troy (a soldier who charms her but who has a dodgy history with women and money).

The why of it all was lost to me, as previously explained by my brain not being into it, but Hardy apparently wrote this novel as a way to preserve in writing the rural English farming culture that he saw disappearing through industrialization. Gabriel Oak is the ideal English farmer: dependable, in tune with nature, hard working, honest, and loyal.

I honestly finished this book underwhelmed, and I was glad to be done with it.

Then I heard there was a film version with Carey Mulligan, Matthias Schoenaerts (from The Old Guard, which is a movie you should all watch if you haven’t seen it yet), and Michael Sheen, and that it was good, so I sat down last Friday night to watch it. It was so lovely it made me retroactively appreciate the book. Everything that failed to land for me in the book (Hardy’s style, mostly, very wordy) hit very hard with the film. I highly recommend watching it even if you have no desire to read the book. Anyway, now that I’ve seen it, I can’t even be mad that I mostly had to force myself through this book for a couple weeks. Maybe I’ll revisit in the future when I’m in a different head space. I’ll definitely be watching the movie again.

Read Harder Challenge 2020: Read a book that takes place in a rural setting.