Reader, this book is, without a doubt, the single most beautiful hardcover I have ever seen. Just look at those blue pages! Absolutely stunning. I admittedly bought this book simply because it was so pretty…and then, Cannonball friend Karen McManus tweeted about what a great mystery it was, and into the vacation reading pile it went!

This story starts near the end: a young woman named Anna turns herself in to police in a small Hamptons summer town, confessing to the murder of a missing local woman, Zoe Spanos, 8 months earlier. From the transcript of her confession, there are clearly a lot of holes in her story, so we aren’t quite sure whether or not Anna actually has anything to do with Zoe’s death or not.

As the story continues, it jumps from summer to fall to the previous winter. We get to know Anna, who is working as a nanny for a local family for the summer, away from home in Brooklyn for the first time. Anna is attempting to recreate herself after a bad year of drinking, drugs, random hook ups, and visits from the police. And Anna has a chilling resemblance to Zoe Spanos, who disappeared on New Year’s Eve and hasn’t been heard from or seen since. The locals constantly remind her how much she looks like Zoe, and her host family admits that it was her resemblance to Zoe that got her the job, as their young daughter loved Zoe.

Anna gets to know a few people in town: Zoe’s sister, Aster; Martina, Aster’s best friend, who has a successful podcast about Zoe’s disappearance; and Caden, Zoe’s longtime boyfriend. As Anna starts listening to the podcast, she learns all about Zoe and her new friends, and wonders if any of them could be responsible for her disappearance.

Anna also starts to have strange visions — sort of like deja vu — whenever she thinks about Zoe, and some of the visions are so vivid she starts to wonder if she has ever actually been in this town before, or if she had previously met Zoe.

The mystery constantly had me second guessing myself. I kept thinking I knew what happened and who did it, and then Kit Frick would pull the rug out from underneath me with something so surprising, but that made so much sense. Did I 100% buy the ending? No. But I didn’t care. I was so invested in the story, and was impressed that all of the loose ends got tied up by the last page.

Other things I loved about this book (besides the blue pages):
Several references to Rebecca and Manderley. What better way to set the scene than by paying homage to one of the creepiest mysteries ever?

Anna is most definitely an unreliable, and often not very likable narrator, and I was still hoping she would be ok at the end.

There is a map of the town. I love a good map. 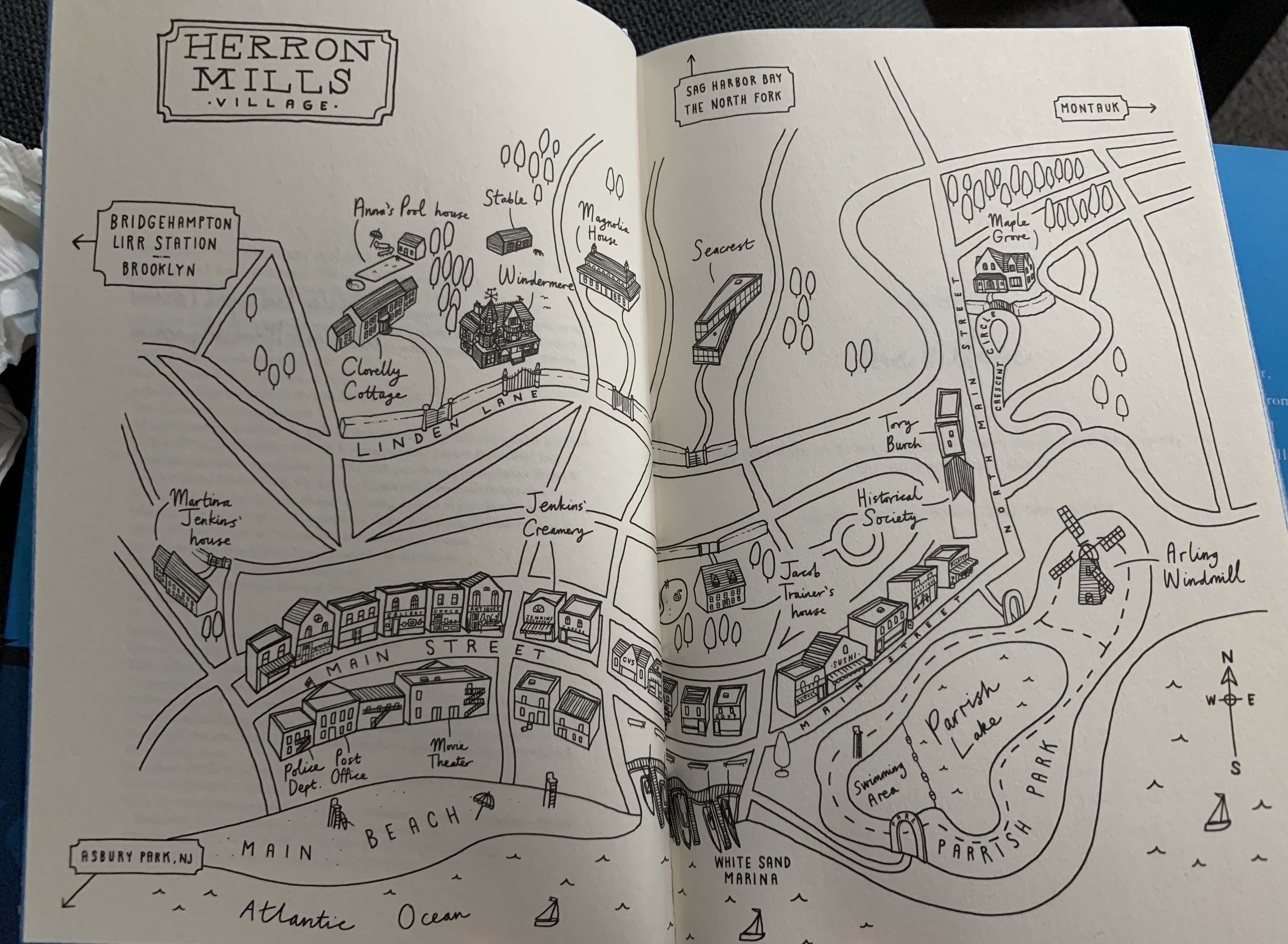 All in all, a great summer mystery. I’ll be looking for Kit Frick’s earlier books, for sure.