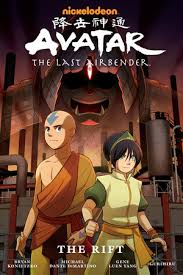 Avatar Aang, in the midst of a celebration of the first jointly governed colony, is beset by visions of one of his former lives, Avatar Yangchen, the last air bender avatar before Aang. The visions remind Aang that it is time for Yangchen’s festival, so everyone’s favorite friend group sets off: Aang, Katara, Sokka, Toph, and the Air Acolytes fly to a pristine to cliff to honor a giant statue of an unknown woman. Tensions rise almost immediately between Aang and Toph. Aang encourages valuing tradition and Toph encourages critical thought.

Things get worse when the group discovers that a local refinery is polluting the land and river. Aang and Toph’s friendship is challenged even more as Aang focuses on returning that land to former, pristine glory while Toph focuses on the future of industry and the promise it brings. Unfortunately, that industry brings its own host of problems to the area via environmental and spiritual consequences. In the end, Aang and Toph’s friendship is so strong and deep rooted that they instinctively choose to look at for one another despite their disagreements.

Sokka is still here, like in author Avatar graphic novels, but he still hasn’t had a very prominent role yet. He is still mostly comedic relief and messenger. I do hope that he gets his own story line in a future graphic novel. Katara’s role is reduced as well, but there are short interactions between her and other Southern Water Tribe citizens that hint at how the greater Avatar universe is doing outside of the Fire Nation and Earth Kingdom.

The author, Yang, continues the tradition of all Avatar media of handling many complex and challenging issues in ways that are digestible for children without dumbing them down. The Rift tackles such issues as the consequences of industry, the importance of tradition, the value of friendship, the nature of greed, and the limitations of environmentalism.