> FAQ Home
> Genre: Science Fiction > I did not know this was about space viruses when I started it 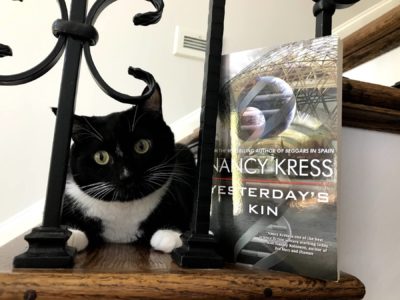 I had never heard of Nancy Kress, but she showed up as one of the few female names on this list of 25 best hard science fiction novels my dad sent me. My library (which I miss so much!) didn’t have the specific one on the list, but had this one available. It’s fine, and weirdly about an impending global pandemic, but nothing super special.

Marianne is a scientist, studying genetics and DNA and something called haplogroups. She discovers a new haplogroup, and all of a sudden aliens show up on Earth. They say a spore cloud is moving through space toward Earth, and if a cure or vaccine isn’t found in eight months, everyone on the planet will die. Marianne is one of the scientists called to the alien ship that has landed in New York City, all working together to save the world.

There’s a lot of science, and also a lot of family drama as Marianne’s three adult children squabble with each other and their mother. Impending global destruction brings out some good in people, some bad in people, and some serious denial in people (which all sounds scarily familiar right now).

It’s a very slight book; apparently Kress is known more for short stories. I think in a more substantial book, the ending would feel rushed, but since the whole book kind of felt that way, it wasn’t so egregious. There are a few oh-so-convenient coincidences, and a few characters with no apparent reason to care about them, but the idea behind everything was interesting enough that I’ll give Kress another shot.