> FAQ Home
> Genre: Science Fiction > Breathing in a collection of sci-fi short stories by a master 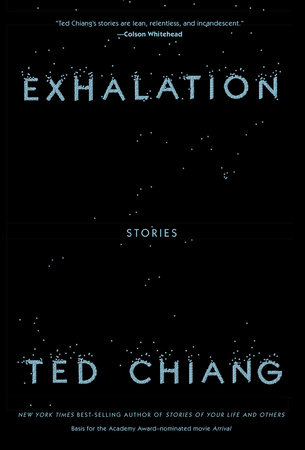 Exhalation: Stories is a collection of short sci-fi stories written by Ted Chiang. Below is a short review of each story but over-all, Exhalation: Stories made me think. Collectively, each story forced upon a small crisis of identity in how I relate to technology in my own world, and I am a more self-aware person for it. Chiang created a collection of stories that all meshes together. No story feels out of place or like an intruder.

“The Merchant and the Alchemist’s Gate”: An interesting and novel take on time travel. I especially enjoyed the “Arabian Nights” style of retelling stories within a story. The philosophical questions of free-will are not fully explored in this story, but this story does kick start a series of stories that will explore similar themes. 5/5.

“Exhalation”: A wonderfully meditative twist to the problem of a perpetual motion machine. A group of air-powered beings discovered that their current form of existence or existence at all is at risk. The main scientist through which the story is told takes a very mature take on all of his discoveries which is a lesson for us in our analysis of our place in this world. 5/5

“What’s Expected of Us”: This one is a very short story about the nature of free will in a world where little clickers that light up before you click them are ubiquitous. It manages to pack in a fair amount of philosophical questions before hitting the reader with a wonderfully comic ending. 4/5

“The Lifecycle of Software Objects”: This one is the most frustrating stories due entirely to the ending. Chiang has a way of picking an object or idea that seems insignificant and exploring all possible implications of said object in truly surprising ways. This short story was my favorite of the bunch (until the ending). This story had the most developed world and human characters. Even the digients (digital pets that have AI) have fully formed personalities. The frustrating part is that the tension of the ending falls flat. It seems like a non-issue based on truths explained elsewhere in the story. The prior complications of raising the digients seemed real and valid, but the stakes of the final decision that needed to be made about the future of the digients felt false or contrived. 4/5

“Dacey’s Patent Automatic Nanny”: I didn’t care for this one. The academia of the piece overshadowed any interesting speculations that Chiang might have made. 2/5

“The Truth of Fact, the Truth of Feeling”: Oh buddy. Stick with this one. The entire short story is slow and starts out very similar to an episode of Black Mirror, “The Entire History of You”, but the ending is worth the wait. In “The Truth of Fact, the Truth of Feeling”, two parallel stories are being told: one story in the future about a journalist doing research on a new piece of technology called Remen which allows people to immediately and entirely accurately recall any memory that they have ever had and either watch it privately or display it publicly and one story in the past about a man from an African tribe Tiv learning to read and write from a missionary and how the process of reading and writing fits in with the traditions of his tribe. The final emotional punch of the story of the journalist is incredible. The deftness with which Chiang pivots the entire framing of the characters viewpoint is astounding. Chiang also manages to connect the Tiv people’s view of truth into the journalist’s life story and events in a way that is poignant without being on-the-nose. This is my favorite story of the entire collection. 5/5.

“The Great Silence”: Another short one. This story takes the reader into the mind of a parrot watching humans attempt to find intelligent life on other planets without realizing that intelligent life is right in front of them. 5/5

“Omphalos”: Today, we often see a conflict between science and religion. In “Omphalos”, Chiang creates a world in which religion is the basis for scientific inquiry and understanding. All scientific discoveries are further proof and worship of God. However, one scientists faith is tested. I loved this flip of science vs religion to one of religion and science vs other. 5/5

“Anxiety is the Dizziness of Freedom”: What if all possibilities are real? This story answers that question by creating a world in which machines allow users glimpses into worlds in which a single quantum event was different. This story expertly balances and explores who two different reactions to this world affect the people in which they reside: that nothing matters because it’s all predetermined and that these are random and humans therefore retain their free will and morality. 4/5