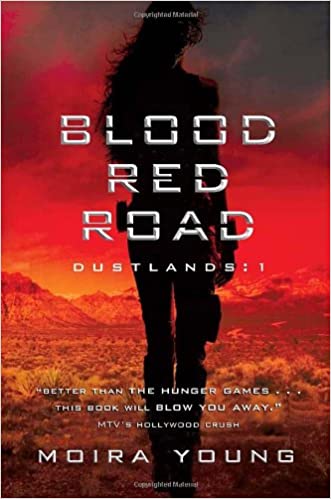 Saba lives with her twin brother, Lugh, younger sister, Emmi, and their father at Silver Lake, miles from other civilisations. The old world is gone, and this new one is hard, with dust storms that appear out of nowhere and cruel droughts. But Saba is happy in her brother’s shadow. He is the light. He goes first and she follows. Until one day, a group of men ride in on a terrible storm, and take Lugh away. Saba promises him that she’ll find him, and off she sets on a journey across the dustlands.

She’s beset by issues from the start – a tagalong Emmi, who Saba just wants to be rid of; a detour to the Cage in Hopetown, where she becomes a must-see fighter; and a distraction in the form of Jack, a young man who sets Saba’s heart stone on fire…

Together with a rag-tag group, Saba hunts down those who took her brother, ready to fight for his return, and an end to a powerful regime.

Told from Saba’s point of view in her particular dialect, it’s very easy to be absorbed into the story and her world. She’s spiky and tough and often too harsh on poor Emmi, but that’s part of her growth, and you get to see how she softens some over time. She’s also smart but doesn’t always push to lead, and she does make mistakes – usually when she’s being selfish and looking out for her own. The love story – such as it is in this one – plays out nicely, with enough to keep you interested, but also not overtaking the story and the main objective – to get Lugh back, even if everyone is changed along the way.

The world Young has created (one in which our time did exist, but we don’t know how it came to an end) is a little Wild West, a little 18th century France, and a little bit Fury Road. I have read this series before and going back to it, it doesn’t disappoint.