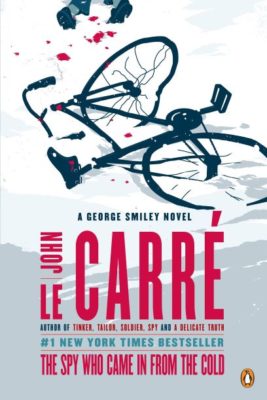 Here’s a clever piece of writing advice: when your plot involves your characters carrying out a plan, don’t tell us what the plan is unless it is going to fail. If it’s going to fail, the reader needs to know what it is beforehand in order to understand how it falls apart. If it’s not going to fail, then it’s pointless to explain it to your readers twice. In The Spy who Came in from the Cold, John LeCarre doesn’t tell us about Britain’s plan to foil a high-ranking German intelligence agent beforehand. That’s because the plan works—what drives you through is what the plan is exactly, and for whom the plan is to work.

I’ve never been a big fan of spy stuff, mainly because what we get in mainstream entertainment is stuff like Bond and Alias—big, bombastic set pieces that cannot possibly be taken seriously as even tangentially related to intelligence work. I ended up reading this book after watching Park Chan Wook’s Little Drummer Girl starring Florence Pugh, based on LeCarre’s book. It’s a gorgeous television series that gets closer to what I imagine intelligence work consists of. Mainly it gets at the idea that it is very difficult to predict how people will act, that any agent, even a highly placed one, has no idea how their actions will play out, and often you end up setting things into motion that you never would have agreed to had you known more about the context.

The Spy who Came in from the Cold plays this out to a nightmarish degree. At the end, it’s hard to know what the British government has even gained by ruining so many decent people’s lives and preserving those of monsters. The information at stake just doesn’t seem worth it. And it should definitely put to rest anyone’s idea that being a spy would be cool or fun. Long segments of the book detail Leamas leading a false but incredibly boring and depressing life.

Another reason I read this particular LeCarre title is because it has been praised to high heaven for its economy of words. To be honest, I’m not sure why English-speakers love economical, Hemingway-ish language so much, or the perennial advice to hate adverbs like they’ve killed their dogs (LeCarre uses adverbs—I do not appreciate how much I notice adverb use due to this advice). Having taught ESL for many years, I have to teach Romantic language speakers to limit themselves to one adjective and simpler, shorter sentence structures. I… kind of like evocative writing, though? I like pastoral openings that take their time to set the scene, I like complicated characters that require the author to spill enough ink to capture them, and sometimes you need a goddamn adverb. LeCarre’s writing is economical but it leaves me cold.

So do the characters. Although the protagonist, Leamas is interesting, his love interest seems stupid and naïve. As well, the tension between Leamas’s pragmatism and the idealism of his love interest and other characters is quite thin, because I don’t think LeCarre actually understands the ideology that drove Communists. Mainly you hear that they believe in History. I don’t know what that’s supposed to mean. Is that how British people pronounce Dialectical Materialism? We have more than one Jewish character who feels sympathy for the project of East Germany, and one character whose father was killed by Germans. You would imagine that they have a well-developed ideology, but when asked to explain their motivations, even in internal dialogue, it sounds childish. I’ve heard undergrads articulate their beliefs better than characters who are risking their lives and dealing with anti-Semitism for their ideals. I’m not even sympathetic to Communism– I’m strongly sympathetic to the points Karl Popper made in The Logic of Science that Communist theory is a pseudoscience, not a science, and generally I think Communist governments are destined to fail since the incentive structures of their systems lead consistently to authoritarianism and a corruption of their own ideals. However, I’ll be damned if The Communist Manifesto wasn’t a good descriptive diagnosis of the problems that capitalism presents, even if I don’t agree with its prescription. All this is to say, politically and psychologically, I found the book shallow, although an entertaining read.