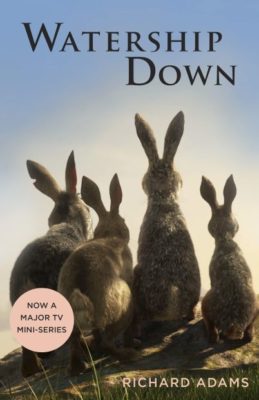 While my father’s bedtime stories to me were Lord of the Rings and The Chronicles of Narnia, my husband’s father read him Watership Down. It’s a book I’d never heard of before meeting him, and as it was a huge part of his childhood, I felt I should finally get around to it. In a word, this book is about rabbits. On a larger scale, this book is about a journey, not unlike the hobbits’ trek in Lord of the Rings. But if you’re looking at this book metaphorically and at its core, Watership Down is really just a metaphor about humanity’s pursuit of happiness.

The story begins with Fiver, a small rabbit with second sight who predicts a terrible genocide about to happen to his warren. While most of the warren refuses to listen to the diminutive and unimportant bunny, his friend Hazel and a group of young rabbits unhappy with their lot in the home warren embark on a journey to find a new home. On the way, they are met with all manner of difficulties and dangers that test their collective strength and their loyalty to the idea of happiness and freedom.

One of the best parts of this book is Adams’ ability to encapsulate the extreme and absolutely believable rabbit-ness of his characters while also giving them grounded human qualities without veering into the anthropomorphic. It’s an impressive feat while also creating one of the most jarring reading experiences of this book. In my mind, I could see both the rabbits being rabbits and humans doing these rabbit activities. I had to keep reminding myself that these were bunnies even though Adams does a spectacular job describing not just the way the rabbits look, but also how they eat, play, live, and move. Adams goes a step further by creating rabbit legends and their own language, called Lapine, the words of which are sprinkled throughout the rabbits’ dialogue and explained through context.

The language of this story is beautiful, Adams’ knowledge and love for Britian’s downs are clear through this piece. He has a very Tolkien-esque style, painting beautiful word pictures in lush landscapes in which his characters love, lose, and struggle. While I’m not sure I would read this to children under 10, it’s a lovely story and I know why it’s still my father-in-law’s favorite.