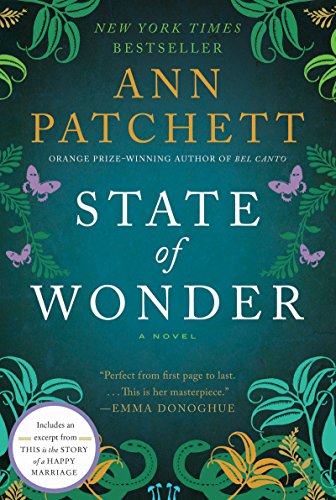 I’m struggling to come up with much to say about this book. I really liked the ending and how Patchett took all the varying characters and plot threads and tied them together in a satisfying way, but the book seemed to take a very long time getting to where it was going. I’m half Brazilian, and have been back to the motherland several times, and this book was pretty much the equivalent of the plane ride there (I’m not one of those who hates air travel – I’m easily entertained by books and airport terminals with more than three food options are just fine by me). You have to get through a lot of moderately boring parts – not terrible, just sorta bland – as a matter of course, to end up in one of the most beautiful places on earth, but the time actually there goes fast. You don’t have a book wrap up this neatly without a lot of character building and plot establishing first, but the various epiphanies come a bit too hastily at the end.

Apparently it’s science gone amok week in Octothorp’s book reviews, as this (along with my last review – Extreme Makeover) also deals with science being exploited by commerce. Here, a drug company sends Dr. Ekman to find one of their researchers in the jungles of Brazil who hasn’t been delivering results, only to find that Dr. Ekman has died in the attempt. His wife isn’t so sure, and asks his colleague Dr. Marina Singh to investigate. We follow Dr. Singh to Manaus where she learns about the delay being partially attributable to Dr. Swenson’s questionable methods, and the ultimate fate of Dr. Ekman.

To say more would be a spoiler, but suffice it to say I wanted the first 2/3 of the book to be half as long, and the last third to be twice as long. 5 stars for the last third, 2 for the first two, average of three.