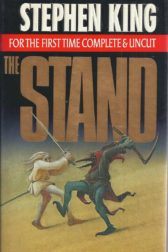 When I was as kid, like maybe 12 or 13, every Sunday after church, my family would go the the mall where we had a store selling outdoor equipment.  Across our store was a used bookstore.  I would spend hours reading while my parents did errands or whatever.  At the end of the day, they let me choose one book that I could buy.  I was a very fast reader and devoured books so for practicality’s sake (to make the book last longer), I always chose the thickest books with the smallest letters.  Which led to me reading a whole lot of James Micheners and of course, Stephen King.  But somehow, I missed The Stand.  I remember enjoying his work a lot when I was a kid, plus, I’m a sucker for post-apocalyptic literature so I decided to read it.True to form, I got the longer, uncut version.

An artificially engineered superflu virus has ravaged the US, and most probably the world.  The survivors gather together for human connection and survival but end up having to face an epic showdown between good and evil.  The book follows the different survivors  until they meet up in small groups and finally into two communities, those who follow Mother Abagail and those who follow the Dark Man.

In typical King fashion, there are a lot of digressions and long backstories, which I quite enjoy. I like to guess which ones of the characters that are introduced will ultimately become important to the story. There were some digressions I did not particularly enjoy, like the Trashcan Man parts were not for me (from what I gather those parts were not part of the shorter version, in which case, I probably would have enjoyed that version better).  I enjoyed the the stories that don’t really move the plot along but flesh out the post flu world, the horror of it.  I liked the parts when they were travelling and was excited for everybody to meet up.  I liked all of the background stuff better than the parts when they were gearing up for the final confrontation and the final confrontation itself.  There is also a lot of familiar stuff if you’ve read a lot of Stephen Kings.  The Dark Man, the shining, destiny, supernatural stuff, good versus evil, etc.

I enjoyed reading it and it didn’t feel that long (except for the Trashcan Man parts).  Likeable characters and interesting premise, and lots of backstory.   This is vintage Stephen King.