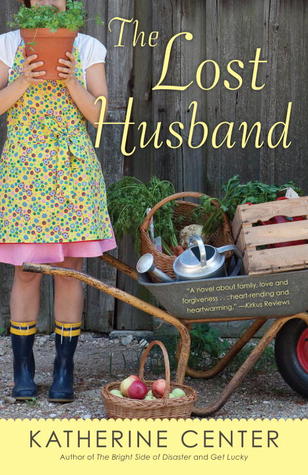 It’s not set at Christmas time, but that’s pretty close. Goats instead of dogs, though.

“Anything was possible. Everything was uncertain. But I knew one thing for sure: I’d bounced back before, and I would do it again and again and again. Because that’s the only choice there is. And as many things as I still had to lose, I had just as many more left to find.”

Libby and her two small children have been living with her wretched mother for the past two years, following the unexpected death of Libby’s husband. When Libby’s estranged Aunt Jean invites her to come live at her farm, milking goats in exchange for food and board, Libby packs up and heads out before even thinking about it. The farm takes some getting used to — no TV, kids running rampant — but comes with a bonus hot guy who mends fences and scowls from under his beard. Libby’s aunt turns out to be a miracle worker with Libby’s kids, and they all learn how to be happy in their new lives.

“You can’t just wish strength for yourself. Or wisdom. Or resilience. Those things have to be earned.”

It’s very sappy, and very predictable, but it’s also a cute read and a perfectly fine way to indulge yourself for a few hours. Watch the stressed out widow fall in love with a mountain man who teaches her daughter how to beat up bullies! Try to guess the big family secret that drove Libby’s aunt and mother apart!

‘Sweetheart,’ Jean said, ‘your mother is never going to apologize… Go see her if you need to. But remember who she is. Going to your mother for understanding is like going to the hardware store for bread.”

I jest, but the dynamic between Libby and her HORRIBLE mother and her Aunt Jean was actually pretty well-done. Best of all, read about goats with funny names because they are so many and they’re all AWESOME. I’ve been watching a lot of Grace and Frankie, and I have a feeling Aunt Jean and Frankie would really hit it off.

This was also silly fluffy goodness, but I read it during a pedicure and what’s better for a pedicure than a book like that? This is the fourth in Guillory’s series of loosely connected romance novels. Royal Holiday focuses on Maddie’s mother Vivian. I like Vivian quite a bit, which really made the novel work for me. The entire book is just vacation wish fulfillment, but I really wanted Vivian to be happy!

Maddie, a stylist who has been featured in the other novels, gets a once-in-a-lifetime opportunity to style a member of the Royal Family. Since the job is last minute and falls over the holidays, she convinces the Royal Family to allow her to bring her mother with. So she and Vivian (a social worker in her mid-50s) hop a plane and fly to Sandringham estate. There, Maddie mostly disappears to help pick out dresses while Vivian falls for Malcolm, one of the Queen’s advisers. Vivian and Malcolm spend a few days together on the estate, all the while knowing that their romance must be short-lived. So we watch them navigate the difficulties of that while also helping each other with some personal issues.

Like I said, the entire book is wish-fulfillment. Who wouldn’t want to jump on a plane for a week on a British estate where you get to meet the queen (and more importantly, ride horses!!) with a very good looking man. It’s basically fan-fiction. And to be totally honest, the dialogue is sort of terrible. But it was fun to go on the tours, and I really liked Vivian’s character. She’s very intelligent and focused on her career while still allowing herself to be open to new experiences.