> FAQ Home
> Genre: Fiction > Sappy, but some interesting history in the background 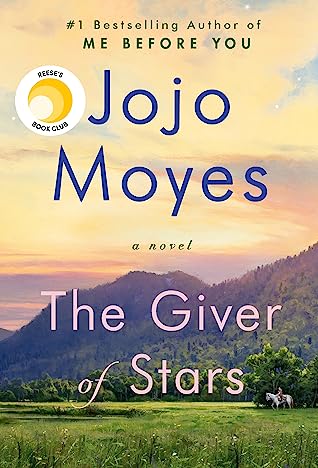 I feel like Jojo Moyes has begun to resemble Liane Moriarty in my mind — I read their big hit a few years ago (Me Before You for Jojo, I think Big Little Lies for Moriarty), immediately devoured all their back catalog, and have jumped on the waiting list for each of their new books. But like Nine Perfect Strangers, which soured me on Moriarty a little (that book was just terrible), I may be ready to retire my super-fan status of Moyes. Not forever, but I think we need a break.

“Up in this high air you breathed easily, drawing in a vital assurance and lightness of heart.”

All of that to say — The Giver of Stars was resoundingly fine, but did not (for me, anyway) live up to the hype or Moyes’s previous books. It’s been reviewed everywhere, but briefly: set in 1930s Kentucky, The Giver of Stars focuses on Anna Wright, a British young lady who was swept off her feet by an American. Bennett Van Cleve married her, brought her back home and immediately began to ignore her. Confused, upset, and extremely lonely, Anna jumps at the chance to get out of the house and help when Eleanor Roosevelt’s traveling library comes to town. Anna joins a few other women (including headstrong Margery, easily the best part of the novel) in organizing the library and delivering books by mule to the country. Up and down the mountain, Anna meets her neighbors (good and bad), and finds her own independence along the way (as you’d expected — the whole book is exactly what you’d expect).

“And there is the bare truth of it, for her and all the women around here. Doesn’t matter how smart you are, how clever, how self-reliant—you can always be bettered by a stupid man with a gun.”

The pieces of the novel are interesting, but I just didn’t find it very compelling. There’s a side plot about trouble at the mine, which is owned by Anna’s father-in-law. Trouble in town, particularly with citizens who have an issue with a black woman working in the library. And Anna’s horrible relationship with her husband — he ignores her, allows her father to mistreat her and shames her for wondering why they haven’t consummated their marriage. There’s so much going on in this book, but none of it really grabbed me like I expected.