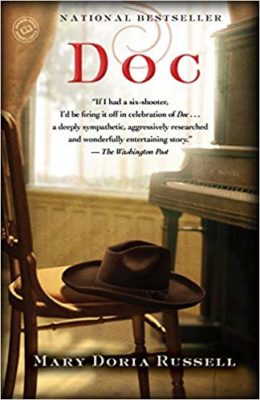 By now, the legend of John Henry “Doc” Holliday has been amended and corrected so many times that it can feel like the truth might be irretrievable. Enter Mary Doria Russell’s Doc, which sets out to tell the truth of the man through fiction. Doc tells the story of its titular dentist from his days as a young man in antebellum Georgia to his infamous days associating with the Earp brothers in the wild west outpost of Dodge City, Kansas. Russell guides the reader through Doc’s classical education and his decision to pursue dentistry as a profession. She shows Doc’s life upended by a series of calamities. The Civil War, his mother’s death, and his own diagnosis as a consumptive conspire to drive Doc west in search of drier air and a habitat more conducive to his health.

The bulk of the novel takes place in Dodge, and Russell is so meticulous you’ll think she was there, walking the dusty streets with these colorful characters, so many of whom have gone down in American history. Here we meet Wyatt Earp, a simple but principled lawman who struggles to keep up with the local politics that impact his livelihood. We meet Wyatt’s brothers Morgan and James, the former a good-hearted lawman much smarter than Wyatt and a much closer friend of Doc’s and the latter a whorehouse owner with one good arm. There is Bat Masterson, with his taste for fancy clothes and his habit of exaggerating his exploits. Doc’s hot-tempered girlfriend Maria “Kate” Haroney, a former fixture in the court of Maximilian I in Mexico who supplements her and Doc’s income by occasionally returning to James Earp’s bordello.

As for Doc himself, he mostly rides up and down on his luck at cards, making money off the cattle drivers who storm into town to eager to risk their pay but spending it just as fast on booze and extravagances. Resigned to an early death from the wasting disease that makes every breath a hard-earned victory, Doc is nevertheless determined to establish his dental practice and to live his life to the fullest.

The main dramatic thrust of the novel follows stems from the death of a young mixed-race boy that both Doc and Wyatt Earp had taken kindly to. His suspicious death in a barn fire creates a mystery which is a thread running throughout the events of this time. Though not a mystery novel, Russell does reveal the solution in a clever and satisfying fashion.

Russell has published a sequel to Doc which follows the Earps and Holliday to Tombstone, the site of the notorious shootout at the OK Corral. After reading Doc I’m sure the sequel, entitled Epitaph, is an entertaining, informative read buoyed by impeccable research.